What are you playing?

Discussions about Zombie training simulators such as video games, RPGs, paintball or other related simulations.

Yeah, never played the first 1 but some buddies at work talked me into the 2nd. From what people have said is that the environment and actions flow better, the baddies dont feel like lead sponges, and the a.i. is more intelligent /reactive. I think ive played as far as i plan on going. It was meant to be a filler until Days Gone arrives lol. Farcry new dawn didnt last long enough.
Top

fatty21 wrote: ↑
Fri Apr 12, 2019 5:23 pm
Yeah, never played the first 1 but some buddies at work talked me into the 2nd. From what people have said is that the environment and actions flow better, the baddies dont feel like lead sponges, and the a.i. is more intelligent /reactive. I think ive played as far as i plan on going. It was meant to be a filler until Days Gone arrives lol. Farcry new dawn didnt last long enough.

Is there a PVP component? The first one had the Dark Zone. And the Co-op was fun too.
I like your comment more intelligent A/I and lead sponges. So if the baddies aren't lead sponges, does that mean they lower the amount of ammo you carry? I remember laughing at how I'd be carrying 1200 rnds of 556 and 900 rnds of 308 and be running and climbing ropes and jumping down from the second story etc. basically while carrying 400lbs of ammo. But you needed it because it'd take more than 2 mag dumps to kill some baddies, and the bosses...

Im usually carrying around 900rnds for the lmg. They still have the dark zones. Enemies will either have a specific weakness or you' ll see things like grenades that are colored red or yellow that you can shoot to blow them up. Like an elite with an lmg, you aim for his ammo belt to force him to reload so u can light him up like a christmas tree.

The a.i. will flank you if your not paying attention. And when they spawn, its actually through doors and windows now instead of just magically appearing.
Top

Im usually carrying around 900rnds for the lmg. They still have the dark zones. Enemies will either have a specific weakness or you' ll see things like grenades that are colored red or yellow that you can shoot to blow them up. Like an elite with an lmg, you aim for his ammo belt to force him to reload so u can light him up like a christmas tree.

The a.i. will flank you if your not paying attention. And when they spawn, its actually through doors and windows now instead of just magically appearing.
Top

World War Z releases tomorrow 4/16/19 all platforms. just saw some gameplay video and it looks like The Division, except the Zombies go down with just a couple shots, and there are a lot of them.
I think its a $40 game.

Im holding out for reviews on wwz. The videos make it look pretty decent but we'll see.
Top

Thanks to a corrupted hard drive... replaying F04, no mods, going for "Peace among worlds" ending where Minutemen, BOS and Railroad are all okay with each other and you nuke the Institute, and also shooting for 100%. Looking out for a used copy of Metro: Exodus which I have tempered expectations for.

Beat RDR2 once before the HDD went down, and ground a lot of War Thunder, planes only.

Played Battlefield 4 again for the first time in 2 years IIRC.

Played AirSuperiority mode on European servers as there were none active in North America and only 1 ranked PS4 server running with about 12 players most of Saturday morning.

Not playing that long i lost all my rankings for Jets on the Battlelog leaderboards, and on BF4Stats leaderboard. You drop off BF4Stats after a month or two of inactivity. Not sure why I was dropped off the Battlelog, but signed back in and got re-ranked.

Very rusty but started to get better after a few rounds. But by the time I remembered what buttons to push etc. The AirSup servers dwindled off so had to go into a Conquest Large server [mode that has jets] and finished out dominating the sky in a round of Langcang Damn in an attack jet going 12/1.

But playing that little bit put me back on the leader board for AirSuperiority on BF4Stats.com, Currently ranked #4 in the World on PS4. 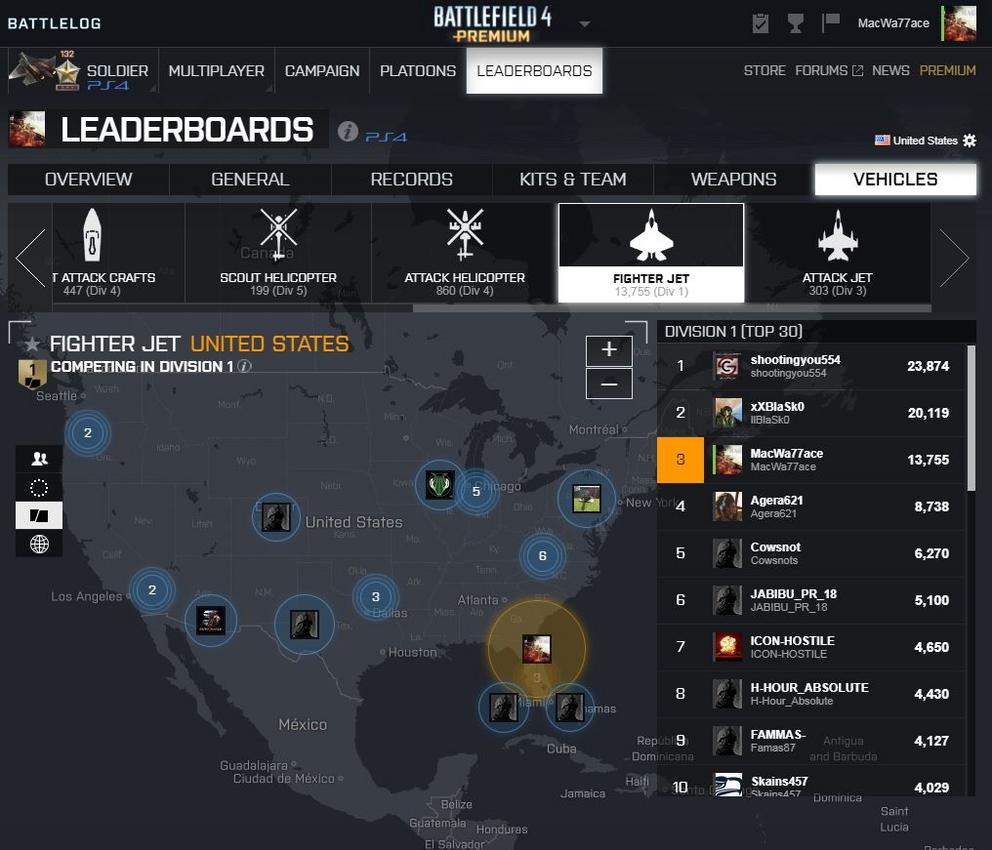 As you may already know, I'm on PS4 and have a subscription to PlayStation Plus which gives you 2 free games a month.
This month's games I downloaded and installed "Horizon Chase Trubo" which is a really arcady driving game.

I used to play driving games a lot a million years ago, from realistic to arcade styles, so thought this would be fun. Its a basic progression stage map sequence with vehicle unlocks and vehicle upgrades.
Well it was like riding a bike, came in first place on my first race and never below second. Lots of PSN trophies gained in a very short time. Took me back to the late 80's early 90's racing games.

Also in yesterday's Ghost Recon Wildlands' new update, they also released a new game mode called "Mercenaries" which I haven't played yet. But when creating my character for the new mode and reading the rules, it looks likes a PUGB style game. Described as an 8 player free for all, PvEvP experience.

This is the in game tutorial for "Mercenaries".


Also have played Call of Duty Modern Warefare campaign past the Pripyat level. That is one on my favorite levels. I'm playing thru on HARDENED DIFICULTY LEVEL for my first play thru and Pripyat's ending was a challenge as I remember from originally playing it.
Lifetime gamer watch at:
MacWa77ace YouTube Channel

May be a bit after the fact, but my husband and I found a copy of Mass Effect 1-3 on the cheap. We picked it up and started to play. Looks cool and has a lot of the typical dynamics Bioware is known for. We enjoy most Bioware games.
"When you can't run, you crawl, and when you can't crawl..." "You find someone to carry you."

I played Ghost Recon Wildlands' new game mode 'Mercenaries' over the weekend for a little bit.


Playing with others:
So apparently its 8v8, where everyone is against everyone?!?. Although it looks like there are teams, there is no component for playing with your friends. Or to actually team up with fellow team members which are just 'randoms' and most don't have mics. You have to kill everyone you see basically. So if there is no teaming up with others then the description should be changed to 1v15 IMO. And there is no team win or bonus if your teams Merc gets extracted as far as I can tell.

But maybe I don't get it yet. I tried to play with my friend, and while we were in a chat party talking about what we were doing in the game, we were not on the same map/server, not that that would make any difference. But I could see how getting a bunch of friends on the same map/server and finding out who is best or who gets braggin' rights for that day/week by being able to join a server with your mates. That would be really fun Ubisoft.

Now for me it always seemed that 1) it took a long time to find players and start a match, and 2) the match that it matched me with seemed to already be underway, which is an extreme disadvantage IMO. I'm going to have to go to the interweb to find out what i was doing wrong.

Gameplay:
But you start with bare hands and have to find the stuff you need to compete to be rescued by an extraction helo. guns, armor, gadgets, medical supplies, locations of transmitters, vehicles, other Merc's, etc.

Only played a few rounds before quitting in boredom/frustration. 'Cause its a lot of work gathering all that for the final 'there can be only one' ending. And then it actually can end before you even see an actual other player, the maps might be to big.

Old Standby:
Then Played some GRW Ghostwars which is 4v4 PvP. In Ranked mode for July [as opposed to unranked quickmatch].
Lifetime gamer watch at:
MacWa77ace YouTube Channel 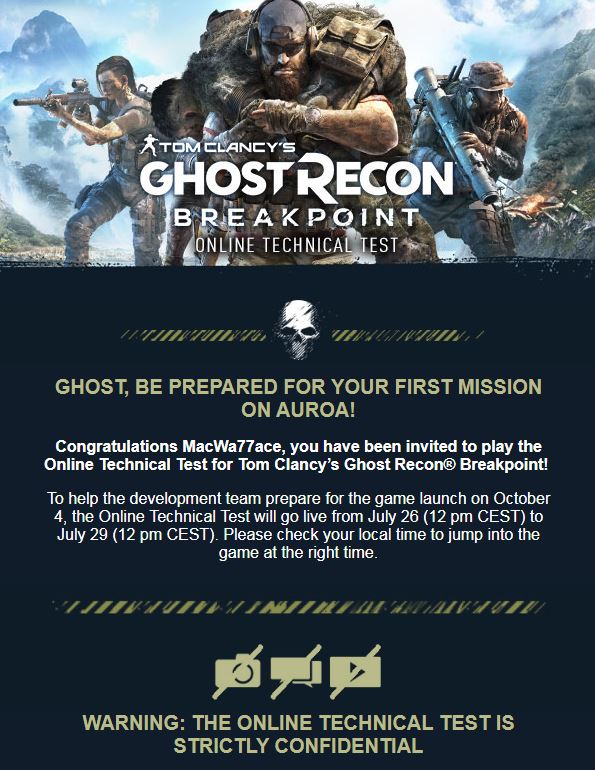 I'll be playing at least some of this, this weekend.
Lifetime gamer watch at:
MacWa77ace YouTube Channel

I just recently got back into gaming and picked up the newer version of Minecraft. I was a bit hesitant to upgrade because I figured I'd lose my progress, but everything was converted to the newest version and all is good.

Took me a bit to figure out the new game mechanics Mojang implemented, but once I got everything under control, it was business as usual.

I'm considering picking up Borderlands 3, but I may wait until next year or whenever it goes on sale. I also may pick up Red Dead Redemption 2 around Christmas when the big sales happen.
Writer of "October Rising"
"Looking Forward, Looking Back"
"Looking Homeward"

The Player Stats network shut down. Does anyone know of another player stats tracking website?

My signature contained rank insignia from a couple games that were generated thru that website. So i have to remove them and will be stat-less until further notice.

Since I have been sick the last few days, I have actually had time to play Day R Survival on my phone. I played it in early 2017 but it is even better now.
Top

Been back playing Battlefield V the last two weekends. After a multi-month layoff from it. There was a major patch just released and two new Pacific maps dropped. One is Iwo Jima. It also included some US and Japanese weapons and vehicles. MI Garand is one of them. There will be two more Pacific theater maps drop by Jan 2020. Lots of fun.

For those that may not know, Battlefield V changed it's model to a 'Live Service' which means all the new content that drops is free to play if you own the game. Previously it used DLC that you had to either pay up front for the premium version or buy each DLC individually as it was released.

Ghost Recon Breakpoint wasn't doing it for me with the micro transactions and gear score elements, so pulled out BFV, after that long a break I had to do a full update as i missed some, 36gb. then two days later the Pacific update dropped so had to update again another 13gb.

Look at the size of the games I have installed. Have a 2TB HDD. IIRC Star Wars Battlefront II was 112gb, but I uninstalled it to make some room before I changed my HDD from 500mb to 2TB and never reinstalled it. 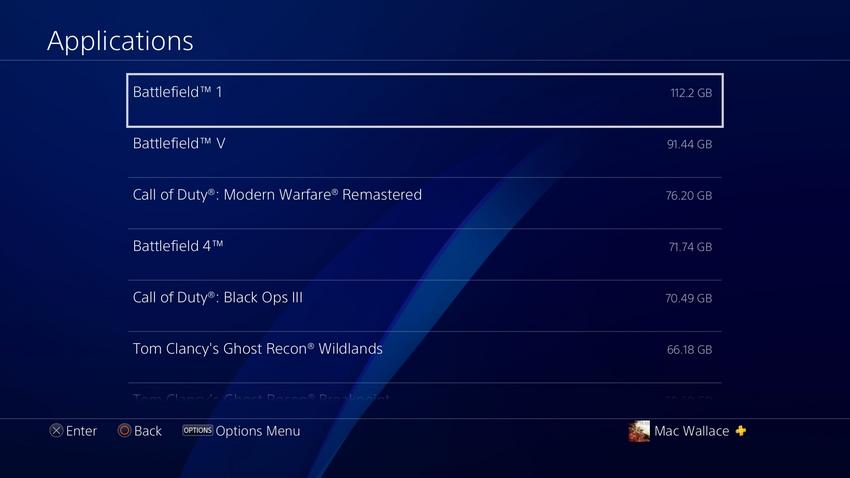 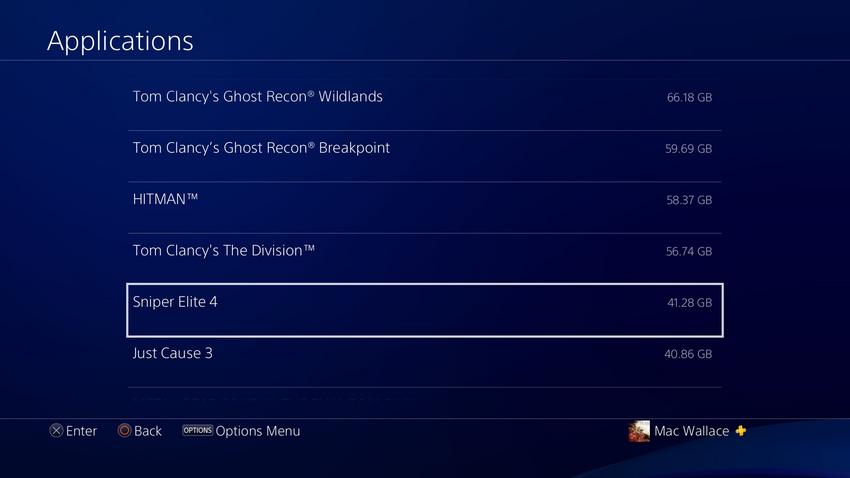