Another collision of paracord and a boonie hat, this time with a chain sinnet...

This was a project I started on two or three years back, wasn't happy with it so it got shelved, and finally revisited it for another go. I've got about 40 feet of paracord wrapped, zigzag style like you'll sometimes find on store bought spooled cordage, onto a free spinning spool attached to a carabiner(Omega locking D tubular shape).

I left just enough room on the biner, after wrapping the PVC spool, for the gate to open and fit onto nylon webbing/PALS/MOLLE attachment points. Makes for fast deployment when needed.

Although I had imagined making an all metal/titanium setup with a seamless spool spinning on sealed bearings, I'm not a machinist and have no shop, so I've stuck with scrounged materials that most folks can get a hold of to make their own. It's a simple project with a carabiner, appropriately sized piece of PVC pipe for a spool, cut and halved with a hacksaw to fit over the biner, gaffer/duct tape to resecure it, then add the paracord...

Here's a short demo video of pulling the cord off the spool...

*For those that keep track of their EDC gear's weight, the carabiner/spool with 40 ft of paracord comes in at 5.5 ounces. I used my 20 year old Omega locking D carabiner, but similar sized ones made nowadays may be slightly lighter...
Stormdrane's Blog
Top

Wow I really like this idea. While it might not make sense to do this to all of your paracord. I think it would make sense to have at least one roll of paracord like this. Thanks for the idea, I will have to work on doing this myself soon.
"Once a man has seen society's black underbelly, he can never turn his back on it. Never pretend, like you do, that it doesn't exist"

Now THAT is really cool! I really could have used something like this yesterday, along with the mini pocket grapple from County comm. We were in an Academy Sports and I wanted to get a cooler bag off the top shelf; I ended up using a camp shovel to slide it off, but a mini grapple and paracord would have been way cooler.

I found some old spools of Wellington Sportsman's Cord in the closet and used an empty one with another carabiner. I managed to get 40 feet of paracord on it with the side-to-side spooling method. I bought those spools at Walmart several years ago, so I don't know if they still carry them or not...

Been following your blog and your YouTube tutorials and first want say thanks for all of your help. This is another fantastic idea. Wanted to know how big is the carabiner you used.

Been following your blog and your YouTube tutorials and first want say thanks for all of your help. This is another fantastic idea. Wanted to know how big is the carabiner you used.

Ive used the full sized D shaped climbing carabiners, Blackhawk non-locking and Omega locking models. Oval shaped versions should work fine for this project too. Other shapes and smaller key chain type carabiners will limit how much cord you can get onto them, but they could still be used as well.

If you make a PVC pipe spool or reuse another spool, you have to make sure the inner diameter of the spool is larger than the widest cross section dimension of the carabiner, where it will fit over/around the carabiner. The Blackhawk was about 12mm wide and the reused plastic spool had about a 16mm width for it's center, leaving more than enough room to fit. The older Omega carabiner was slightly smaller and the 1/2" PVC pipe is just a couple of millimeters wider. So, measure your carabiner first, then you'll know what size pipe or spool will be needed to work with it.

I used tape to secure the spools back together before coiling on the paracord, so that after the paracord is gone, you can easily pull the spool back off and use the carabiner without it. The spools could be glued together, but that would make them harder to remove.
Stormdrane's Blog
Top

I finally got around to making a YouTube video for zigzag spooling paracord...

Thanks for your guidance and inspiration. I happened to be in our local Home Depot and came upon their "carabiner" section. They had all of the smaller sizes but on a side display they had a pretty large one used to hang stuff on. It was their WorkForce Hangalls Carabiner #138-830 for $2.99. This is one of those bigger carabiners with a foam "grip".

I immediately removed the foam covering the long side of the carabiner. For my tube, I picked up a couple empty thermal printer paper spindles used to print guest checks on from the the restaurant where I manage.

Here's the trick I used to getting it on to the carabiner. Instead of cutting the entire tube in half lengthwise, I cut through one side of the spindle. Inserting the blade through the incision I just made, I cut the opposite side halfway through creating a hinge allowing the spindle (tube) to open up wider and get it onto the carabiner. In my case it took one and a half spindles. Once i got them both on, I used duct tape to tape the two ends together to form one 4.25" tube.

I then covered the conjoined spindles with an inner-tube ranger band. Not only does it hold the cut tube together around the carabiner but it provides a nice surface for the paracord to hold on to.

I demo'ed the spool for my wife pulling the paracord off of the spinning spindle. As I was doing that, she asks, "So, what happens when you get to the end?" Just as I got to the end the paracord fell to the floor and she replied "Yeah...

" So I put a loop at the end and strung it through the carabiner.

Well, that's my version of Stormdrane's Carabiner Paracord Spool. I hope I didn't butcher your design too much.

Great thread - this is the 21st Century version of whittling.
I read somewhere that wrapping the cord when it's wet (say around a knife handle) will mean it tightens more when it dries - is this correct??
Top

here are a few of ones ive made:

A paracord pineapple knot, which is a turks head knot variation, tied on a breacher bar. I made the knot a bit longer than in the tutorial link, but it's actually shorter than the first time I tied it on the bar and felt it was longer than I wanted, so untied and started over... 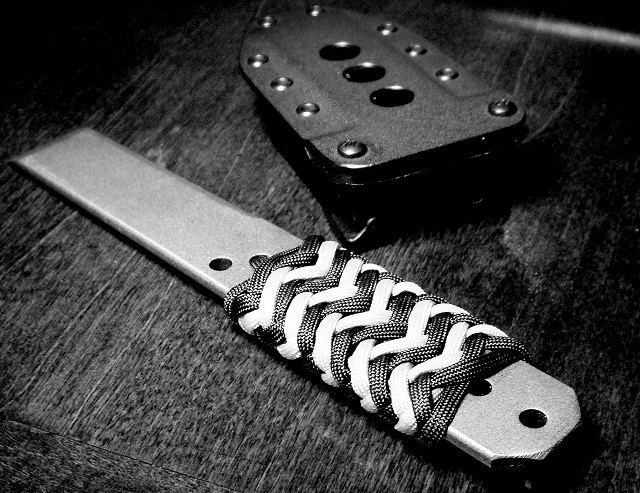 How many patterns are there for knife/sword handles and sheaths? Is there some examples?

Some knives and swords i have, have wood handles and some are just the metal tang.
Life is like a box of chocolates, eventually we will all melt in the sun.
Top

Ableto wrote:How many patterns are there for knife/sword handles and sheaths? Is there some examples?

Some knives and swords i have, have wood handles and some are just the metal tang.

There are many ways to wrap handles and sheaths of knives, swords, hatchets, etc.. Look around google and search though 'images' to find examples. There are tutorials and 'howto' videos on YouTube, Instructables, and scattered around various websites and blogs. Look for something you like, find out what it's called, and search from there to find out more.

I made one that looks identical to this.

I've made a few basic single and double cobra stitch bracelets before. I just bought about 400 feet of different color cords. Just made this...

I'm really happy with how it turned out. Coyote Tan and Digital ACU.

Anyone have a good source for the stainless steel shackle?
Top

crashin wrote:Anyone have a good source for the stainless steel shackle? 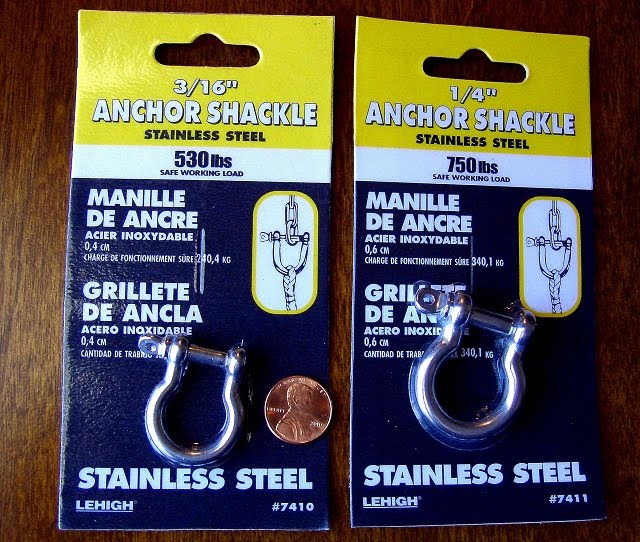 Those look like something I would stick through spare MOLLE loops just for shits. And clipping stuff too. But mostly for shits.
"It is better to have one and not need it, than to need one and not have it."
-- Condom Rule
"Everybody gets one."
-- Spiderman Rule
Top

Where did you get the glow in the dark cord, if I may ask. I have been looking for some for a while and if you have a link, that would be great.

"If ye break faith with those who died,
We shall not sleep..."
Top

Where did you get the glow in the dark cord, if I may ask. I have been looking for some for a while and if you have a link, that would be great.

I've done several projects since my last post in this thread, you can see them on my blog. 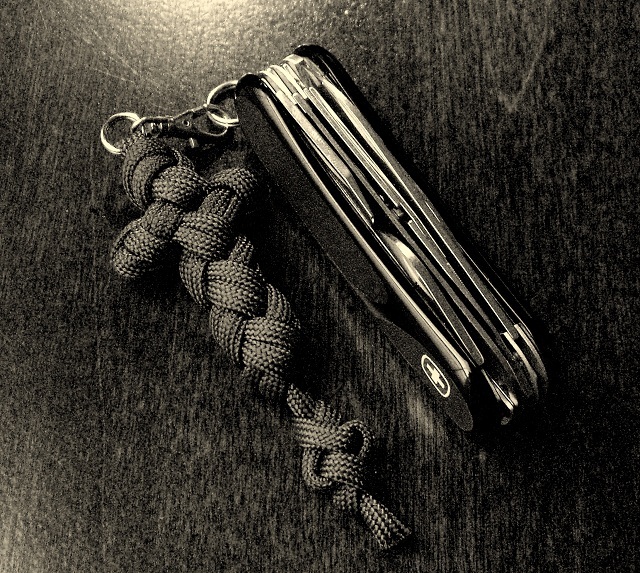 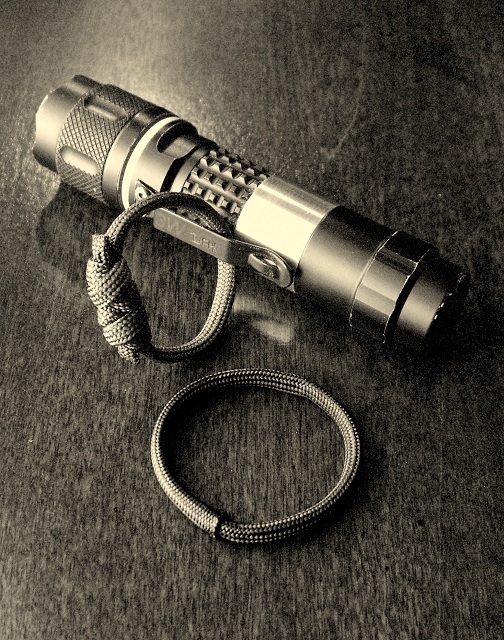 Some knot examples I tied with paracord... 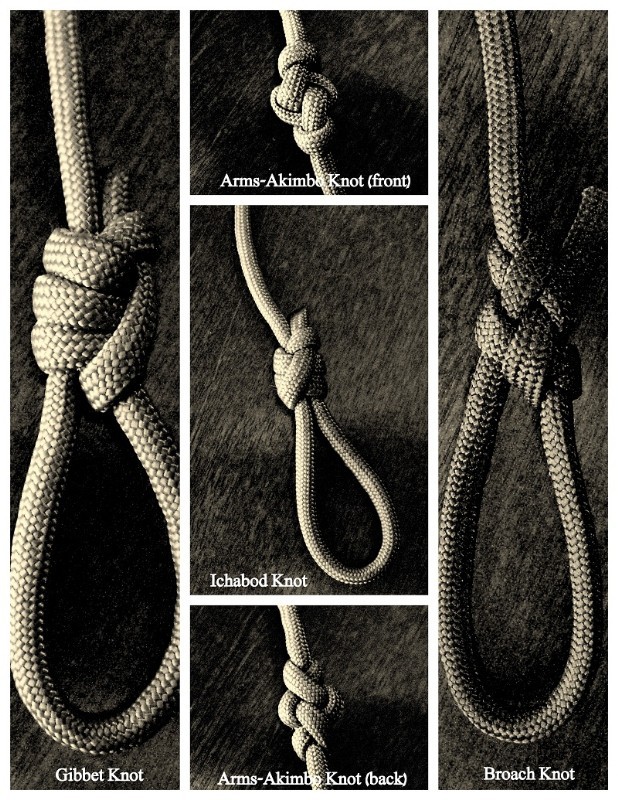