Just concept bike for now but it might make it to the floor: 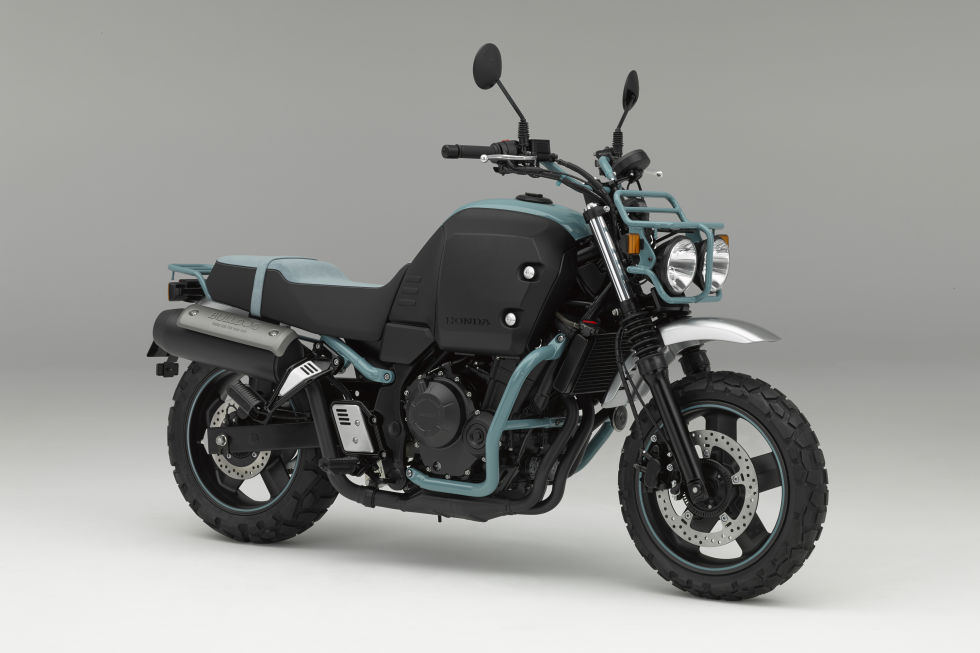 Kind of like an enlarged Ruckus.
You go 'round and around it
You go over and under
I go through
Top

Called the Bulldog the bike is currently geared towards the Japanese market with a 400CC engine.

If brought elsewhere industry experts are thinking it will use the CB500's 471CC engine as a basis.

The Japanese motor is reportedly spitting out 47hp and figures claim 93.4mpg. Those are really impressive numbers (for non bike people: if this engine was equally efficient and 5.0L it would have 500HP with no turbo or supercharger - by comparison the 2015 Z/28 Camero is 7.0L and only 505HP, the 2015 Vette Z06 is 6.2L supercharged and only 650HP, the 2015 Mustang GT is 5.0L and has 435HP). The 400cc motor they have in there is putting out great power for size, and has fuel economy you don't often see in engines greater than 100cc.

The bike includes small racks in the front and back for cargo. I don't imagine either of these racks will make it through to production in their current state. They are representative of an idea, but don't appear to be functional, and yet, they require extra building costs.

The bike also has a small amount of storage on either side of the gas tank. I'm thinking this is because everyone loves the storage in the NX700. With the gas tank in a standard location it looks like they're almost turning the storage area into something that will function like a fairing.

Every report I've seen on this bike compares it to the Ruckus. Aside from the dual front headlamps and knobby tires I don't see much similarity between the two (either the 50cc version or 250cc versions of the Ruckus).
Top

The rear seat looks a bit small to tie stuff to and I would prefer slightly lower bars to. That mileage on knobbly tyres would be impressive.

If they put a CB500 engine in it you might as well get a CB500 (which are one of the best bikes they ever made).
Top

I think the bars are up there because the bike is so weensy. I'm having a hard time understanding the scale and dimensions of this bike, but I'm afraid it might be GROM-sized. I sat on one and all I needed was a fez to make the illusion complete.
MF'N TEAM LEADER

I second the Grom assessment. Looks like a fun grocery getter though, that is if you aren't too tall or heavy.
They see me trollin', they hatin'.... keyboardin' tryna catch me typin' dirty


Halfapint wrote:There are some exceptions like myself and jeepercreeper.... but we are the forum asshats. We protect our positions with gusto

zero11010 wrote:The girlfriend is a good shot with a 10/22.
Her secondary offense will be nagging.

I like everything about the Grom, its just a tad small for me. I fear this one will go the same route
Opinions subject to change in light of new information.

JeeperCreeper wrote:I second the Grom assessment. Looks like a fun grocery getter though, that is if you aren't too tall or heavy.

) and it does look that it would be a blast to take on 'pavement optional roads'. Love the location of the racks, but yeah they need to be more practically sized.

For some reason I feel that there needs to be a new category assigned to rigs like this, maybe 'PABs'?
Pocket Adventure Bikes
colinz wrote:
ZS - Where having livestock, land and a good attitude is more desirable than being Size <6, 'ripped', or rich.

Doctorr Fabulous wrote:I like everything about the Grom, its just a tad small for me. I fear this one will go the same route

I desperately wanted to love the Grom but at 6'3" its just comical when I get on it. And it makes like 12HP. Seriously I might as well get a pocket bike, its firmly in the 'monkey-fucking-a-football' category.
MF'N TEAM LEADER

The Grom is a boxy scooter. Nothing wrong with that but hardly a post-apocalyptic steed.

This is your post-apocalyptic steed...

Meet the Honda CRF1000 Africa Twin. I love it and hope to get one sooner or later (If circumstances require me to wear out my DL-650 first). I have loved the Africa Twins for years before I knew what they were or wanted a motorcycle. These bike are probably going to be awesome.
I am not a 'gray man'. I am a brown man, coyote brown. With FDE highlights, of course.
Top

Been around the world....

Or the newer version would be A TW200
WWSD?
Top

Man, I thought Bid Red bought Ural for a second.

They build solid bikes, but I need a KLR...