Topics on Radio (CB, GMRS, Ham, etc), GPS, Smoke Signals, or whatever else you can use to talk to other people who are not within yelling distance. 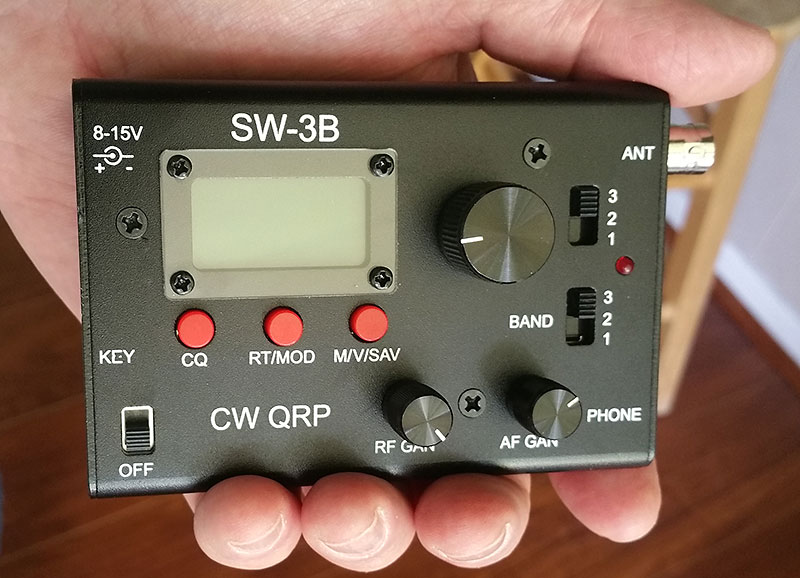 Slightly larger the diminutive MTR-3B but with many features offered for a tiny penalty in weight.

Broadband RX - 5 to 16 Mhz. Covers several SW broadcast bands, in addition to full band coverage on 40M/30M/20 meters. 5 watts, CW/CWR/ (rx only in the LSB/USB mode) Despite being CW tx only, this fill many needs and provides NVIS capability on 40 M (7 Mhz)

Waiting for mine to arrive as it will replace my MFJ-9200. While it is just 3 bands, these bands are the most popular for QRP work in the field. The

Input can be 8 to 15 VDc,an important distinction from the MTR-3b. 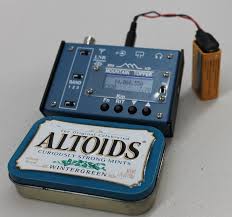 These are very compact radio sets.

More data and photos at the vendor website
https://www.venus-itech.com/product/sw- ... ansceiver/
TacAir - I'd rather be a disappointed pessimist than a horrified optimist
**All my books ** some with a different view of the "PAW". Check 'em out.
Adventures in rice storage//Mod your Esbit for better stability
Top

The SW-3B is a lightweight, rugged, miniature, single-conversion transceiver that operates (transmits) on three Internationally allocated high frequency bands within the Amateur Radio Service in A1A (CW) only.

It may be powered with any stable DC source between 8 and 15 VDC.

Power consumption in is minimal . With the backlight on (display illuminated), the radio draws ~43 mA in recieve. With backlight off, it draws only ~37 mA (@13.8 VDC). Actual current used will vary slightly based ion input voltage. Transmit draw is on the order of 800mA.

The SW-3B also offers broadband reception from 5 to 16 MHz in the so-called shortwave bands. This broadband feature also allows reception of WWV on 5, 10 and 15 Mhz for frequency check, time and weather reports. Reception of International Shortwave Broadcasts using USB mode is possible with careful tuning. Nice for staying in touch with the rest of the world while out in the wilds away from commercial AM/FM services. (I'm talking North Slope AK here). Sadly BWBC stations are becoming a thing of the past.- except for the Chinese.

The unit is all digital. The VFO control provides for tuning in 10 Hz, 100 Hz. 1kHz, 100KHz increments. The RIT/XIT function permits receiver offset tuning in 10 Hz increments and transmitter offset tuning in 100 Hz increments.
In addition to manual tuning via the rotary encoder, eight memories per band are provided to store frequency/mode. Changing between stored Memory and the VFO is by a pushbutton. Changing between Memory locations is via the Tune (VFO) knob. A slide switch is used to change between bands.

Placement of the operator controls and connectors only on the sides of the chassis clearly puts this radio in the class generally known as Trail Friendly. With both the top and bottom of the chassis free of control ports, you may place the radio set upright, on a stand or tilt the radio set for the best viewing angle and not impact any connections. While seemingly a minor detail, this flexibility is a nice touch for operating in the field. This is no small thing.

The high-contrast digital display is large enough to easily read in bright sunlight and it has a backlight for viewing at night. The backlight may be turned off during daylight operations for a ~15+% saving in current draw on receive. The backlight may be set to on, off or AUTO. In AUTO mode, the unit will light the display for 10 seconds on any command input, such as adjusting the VFO. After 10 seconds with no operator input, the display backlight will extinguish.

The receiver is single conversion, with a crystal ladder filter to reduce noise and adjacent signal interference. The Beat Frequency Oscillator (BFO) operates at 4.914 MHz. The BFO injection signal to the second mixer signal is provided directly by the Si5351 DDS source. Very clever, decuses the parts count and ensures the signal stays in the filter passband.

The filter may be set for narrow (CW/CWR) and wide (USB/LSB). This bandwidth change is controlled by a simple pushbutton and is automatic, depending on the mode selected. Receiver performance is impressive, with Minimum Discernible Signal (MDS) levels of 0.1 to 0.2 microvolts (-127 dBm @ 50 ohms) typical.

The transmitter is a classic Master Oscillator/Power Amplifier (MOPA) type fed directly by the DDS system. The transmitted signal passes through several filters to reduce harmonic content in the output.

The transmitter final amplifier (PA), is a robust 2SC2078 PNP transistor (Q3). The PA is protected from high VSWR by a Zener diode, type 1N4756A. The antenna is attached via a BNC connector mounted on side of the unit. Both are inexpensive and available from more than one vendor.

The internal keyer supports iambic keying via a set of operator-supplied paddles. Use of a straight key is supported as well. (See operation manual for more on keys). A keyer memory allows automated calling of CQ w/Operator callsign at the push of a button.

Operating on a DC input between 8 and 15 Volts DC, the radio transmits with a nominal power of five watts output with 12.6 DCV applied. The power input is protected against reverse polarity. External power supplies should be able to provide up to 2 amperes of current with no AC ripple. A simple battery pack made up of eight "AA" (or 10 NiMH) batteries provides ample power.

Please note that the unit transmitted power output drops off with lower input (supply) voltage. Operation is possible from a common 9 VDC battery for a limited time, at reduced power (TX) levels.

All of this in a radio set slightly larger than a common Altoids tins.
TacAir - I'd rather be a disappointed pessimist than a horrified optimist
**All my books ** some with a different view of the "PAW". Check 'em out.
Adventures in rice storage//Mod your Esbit for better stability
Top

Full series Manual was submitted to vendor, once it clears their review, I'll post the full thing here, if there is any interest.
TacAir - I'd rather be a disappointed pessimist than a horrified optimist
**All my books ** some with a different view of the "PAW". Check 'em out.
Adventures in rice storage//Mod your Esbit for better stability
Top

Where you lucky enough to get one B4 they ran dry?
TacAir - I'd rather be a disappointed pessimist than a horrified optimist
**All my books ** some with a different view of the "PAW". Check 'em out.
Adventures in rice storage//Mod your Esbit for better stability
Top

Where you lucky enough to get one B4 they ran dry?

https://www.venus-itech.com/download/SW ... _guide.pdf
TacAir - I'd rather be a disappointed pessimist than a horrified optimist
**All my books ** some with a different view of the "PAW". Check 'em out.
Adventures in rice storage//Mod your Esbit for better stability
Top

For radio dummies... Could someone compare and contrast this with one of the Baofeng radios that all of the kids are buying these days?

Thanks!
I am not a 'gray man'. I am a brown man, coyote brown. With FDE highlights, of course.
Top

Dabster wrote: ↑
Thu Aug 06, 2020 3:09 pm
For radio dummies... Could someone compare and contrast this with one of the Baofeng radios that all of the kids are buying these days?

Baofeng has a few different models, but basically they are all meant for 6 miles (if you are lucky) of communication without a radio repeater. Actually, you can get special antennas and if the ground is right and your friends have the right gear, some Baofeng "base station/Mobil radios" could go up to 100 miles. But their handhelds are shorter range.

The radio in the OP is designed more for 50 miles out to almost the other side of the world. If you do things right, I think it can talk closer than 50 miles.

The radio in the OP will also need a large antenna, or probably several of them, ranging from 10m long to 40m long. You can get fancy and go shorter, but not like a Baofeng.

That is my understanding, others can fill in on everything I missed.
*Remember: I'm just a guy on the internet

In a basic sense, both radio are (mostly) made in China and put out 5 watts of RF. That it where it ends.

Yes, if you are on a mountain and someone else is on a mountain..lots of range. Or using a repeater on a mountain, .good range. No mountain, no repeater, then maybe a mile to two. Less if trees or heavy brush is in the signal path or in an urban area.. See ARRL for more or check out some of the YT vids on VHF operations. Use SOTA for a search string, to see mountain top ops.

Now then CW - Morse code. This is nearly the most efficient (Eb/No or watts per Mhz) narrow bandwidth comms which means the receiver can be tight - very narrow bandwidth (low noise) But make no mistake, CW is a skill - or a new language, but easier to learn than Russian or Farsi.

You can use a memory keyer (I do) and there are 'code readers" which do not work as well as the wetware between your ears.
The radio is stable to receive digital comms (PSK31, FT8, RTTY, etc) no Bueno for sending tho.

The radio covers the shortwave broadcast bands (5 - 16 MHZ) for ssb/AM on receive. To me - a big deal.

Bofang - cheap enough to throw away when they break,. Difficult to program. Should have an FCC license, because all the other stuff (MURS, GMRS etc) require the use of specific type approved radios - the Bofangs are not - type approved or accepted. Plenty of chatter on the web.- you likely won't get caught. You should know the FCC fines start @10K per violation if they do go after you.... -

SW3B requires at least a Technician level Amateur service license (ham radio 'ticket') and General if you want to use 30M.

Ping me n the PM with specific questions.

Bottom line
at $188 it is the best value for the ham on the market today in finished radios. There are some kits, but the multiband kits cost more than this completed radio,.

hope this is of some help.
TacAir - I'd rather be a disappointed pessimist than a horrified optimist
**All my books ** some with a different view of the "PAW". Check 'em out.
Adventures in rice storage//Mod your Esbit for better stability
Top
Post Reply
11 posts • Page 1 of 1