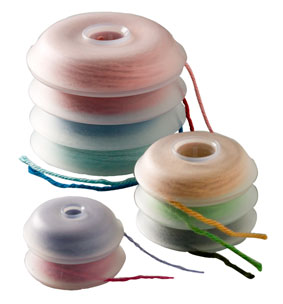 Intarsia bobbins are made from flexible plastic and flip open and shut. They are normally used for knitting techniques that are beyond me to explain. The thing about them that I have learned though, is that they are great for winding up paracord, string, fishing line, wire, and what have you and keeping it organized. When you flip them shut, they close over the cordage and keep it from unwinding. You can open the bobbin, unwind what you need, then close it again. So, I can for example use 10 feet of a 50 foot paracord to tie something up without cutting the ten feet off, I just have a weird plastic doughnut hanging off one end of the line with the remaining 40 feet neatly coiled inside. It's quick and easy to unwind, and quick and easy to wind up again. Especially useful for making bear bags, as the bobbin on the end makes a convenient weight to throw the line over a branch.

I just placed another order with KnitPicks for an embarrassingly large number of them. I have found that these (link below) are better than the beadsmith brand ones, which are too floppy and don't hold shut as well.

There was a thread a few years ago about a guy winding exotic cordage like kevlar and stuff onto these things, he was trying to sell the assembly and I decided I'd rather stick with plain nylon and wanted to make my own. Now I can't find the thread. I've incorporated maybe half dozen of these into my bugout bag.
I find it uniquely frustrating that so many preppers have their heads in the sand about climate change.

But, I've come to realize there's no point in arguing with someone if there's no possible evidence you could present that would actually change their mind.
Top
Post Reply
1 post • Page 1 of 1