Zombie and/or other Post-Apocalyptic related movies for us to study and know what not to do.

My son, you will travel far, but never be alone, for I am with you, my M14 and battle axe comfort you.
Top

I have to admit, he looks good for a lizard pushing 60.

I've been keeping my eye out for this one. Frank Darabont is supposed to have rewritten Max Borenstein's screenplay, but I haven't read anywhere that he's officially attached to the project.......Either way, it has to be better than that 1998 sequel to Ferris Bueller's Day Off.

Looks like this one is going to be a real serious Gojira flick.

I remember watching them in Japan as a kid, great movies for being so cheesy.
Top

Looking forward to this, hopefully he's treated properly along the same lines as Cloverfield...unstoppable!
BLOG | YOUTUBE

11 Bravo
"If the enemy is in range, so are you."
"If your attack is going too well, you’re walking into an ambush."
"Try to look unimportant; they may be low on ammo."
- Infantry Journal

History shows again and again how Nature points up the folly of Man...
Let Me Die Not Quietly, But Valiantly And Violently

Posts: 1098
Joined: Tue Sep 07, 2010 4:02 pm
Favorite Zombie Movies: so far zombieland because i think it accuratly depicts what a zombie could be like. not a dead becoming undead, but an infected human... kinda like a dog with raibies. even tho signs of other survivors were non existant in the movie except for the 4 main characters and bill murray...
Location: neia

Picks up a bus and throws it back down, on his way to the center of town....
WWSD?
Top

Apparently Big G is supposed to have some other monsters to fight in the movie. I am stoked. I have fingers crossed that Toho Studios has signed off on letting them do some adaptations of the classic Godzilla rogues gallery.
Top

And they refer to Godzilla as a MUTO or Massive Unidentified Terrestrial Organisms
"Its better to die on your feet, than to live on your knees"
Top

Monkey Mancheeks wrote:Apparently Big G is supposed to have some other monsters to fight in the movie. I am stoked. I have fingers crossed that Toho Studios has signed off on letting them do some adaptations of the classic Godzilla rogues gallery.

Oh good, for a bit there I thought I was merely being blindly hopeful!

There are a couple of things in the existing trailers that seem hint at that -and I promise, I not one of those fanboys who will sit there and go thru stuff frame by frame- but I have wondered what that weird curled up claw looking thing (doesn't look reptilian) on one of the shots is, along with the pointy-svelte appendages splashing into the ocean on a different scene.

Lastly there is one other shot where a bunch of HAZMAT suited humans walk up to a gigantic dinosaur like ribcage squeleton...Maybe Monster Island does exist?!?!?!?!

That I have to go see.

I like that a modern movie has the skyscraper sized monster but with a realistic disaster SHTF tone. In reality there should be mass evacuation, panic, people crying and freaking out over al the death and loss of property.

I can't tell you how many Godzilla and King Kong like moves I seen where this giant monster is thumping through a city and the majority of the citizens are pretty much oblivious to the fact until the monster is right on top of them. The older movies you have the typical train or bus full of tourist, that business man who just walked out of his office, the kids with the ice cream cones all totally not hearing any news, warning sirens, and all the thumping, screaming and explosions that have being going on for an hour until the monster is on top of them and then they just stand there and yell. Even worse is the old gag showing the drunk or the couple making out and being completely oblivious he/they were almost crushed as the monster passes by.

The thing that has me a little worried about the movie is that they are really pushing Bryan Cranston in the trailers even though the actual star of the movie is Aaron Taylor-Johnson from Kickass. Cranston gets an afterthought "with...and" mention at the end. They may be riding the coat tails of Cranston success with Breaking Bad and Argo, or maybe they are using him a lot because he has a great "announcer" voice and the scene he are in are intense without giving too many secrets of the movie away. 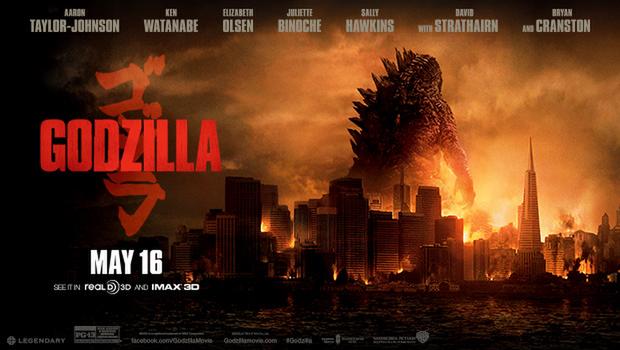 The other thing about Cranston is even though some may think he is this intense actor, he does a lot of comedy and "geek" stuff (Malcolm in the Middle, cartoon voices, etc) He could have showed a big interest in being in the next Godzilla movie, and the basically wrote him in.

Anyway I don't want to get too deep and expose a spoiler, but its interesting.
Top

OneShotFOGE wrote:And they refer to Godzilla as a MUTO or Massive Unidentified Terrestrial Organisms

Godzilla isn't the only "MUTO".

Screencap from one of the extended trailers:

Saw this and thought it was

Godzilla has only just been released here so I'm going to go see it this weekend.

I saw it and thought it was great. The monsters looked and sounded fantastic, the military mistakes were small enough to ignore, and the actors all did well with what they were given to work with. I recommend seeing it on the big screen.
Prioritize your health. Get out of debt. Grow food.
Top

I really enjoyed it. Particularly the fact that GODZILLA was a protagonist and that there were other creatures. I liked the creature sound effects

I saw this on IMAX. Words can not describe the absolute awesome.

I will go again. I haven't been to a movie theater in 10 years.

I wasn't super entertained but the overall quality was very high for a monster movie.

1) they finally destroy a city other then New York (looking at you, marvel and DC)

2) There wasn't 30 minutes of continuos monster fights, they did a good job of cutting back and forth

3) the government/military/general populous wasn't totally incompetent/uniformed/indecisive. Helpless maybe, but at least they formed reasonable plans based on available information.

1) why does a creature that feeds on radiation have teeth?

2) is Godzilla just the biggest dick in the monster world? they kept calling him a predator but he only kills, he doesn't eat. "oh, you want to start a little family? here, let me TEAR YOUR HEAD OFF AND THROW IT ON THE GROUND." and then he just leaves.
share your tobacco and your kindling, but never your sauna or your woman.

1. Teeth are for ripping and tearing stuff to get radiation.

2. Yes, Godzilla was always the type to tear of your head and then return to the depths. It's how he do.
Shrapnel wrote "nobody is trying to be a dick and give out warnings for every little thing"

RonnyRonin wrote:
2) is Godzilla just the biggest dick in the monster world? they kept calling him a predator but he only kills, he doesn't eat. "oh, you want to start a little family? here, let me TEAR YOUR HEAD OFF AND THROW IT ON THE GROUND." and then he just leaves.

And you think that's not natural?

Hyenas and lions will try to kill each other any chance they get, but they seem to rarely (if ever) feed on each other.

I'm off to see the movie tonight, it will be nice seeing my home state getting ravaged in a non Pearl Harbor setting. I even had a few friends cast as extras in the movie.
**Those who live by the sword get shot by those who don't**