Topics in this category pertain to planning. Discussions include how to prepare yourself, your family and your community for catastrophes and what you plan to do when they hit you.

I was blessed/cursed Thursday. My primary job decided it was time for us to part ways. I was looking to go full time back in to police work at my primary part time gig when they add full time staff next budget cycle anyway, but better to leave on my terms than to be told see ya. I have 6 weeks of time they need to pay me out along with next scheduled pay check.

In the meantime I’m job hunting just in case something better pops up and to find some kind of part time work. As far as the preps, my breakfast and lunch every day are coming from there. I have a wife and two daughters, but if I can save the money from what I’ll be eating while watching the Price is Right and Maury, it will help. I’ll also have a better idea of if I’ll want to die in whatever cataclysm occurs instead of eating out of my preps. I cracked open a bucket of rice, and use powdered milk to make a tasty slop for morning time, and have had five year old Hormel Compleats for my lunch. They’re ok but the smell drives my cat insane. I’m also glad I have lots of toilet paper and other assorted home items put back. I put back things for disaster, but didn’t really consider I may need to use them in this manner.
Top

Sorry that happened but as most people on here say, you're much more likely to use your preps for situations like this. Glad you've stocked up and are prepared to take care of yourself and family. Hopefully you don't dip into your preps too much before gainful employment comes your way.

JeeperCreeper wrote:I like huge dicks, Halfapint, so you are OK in my book.... hahaha

Spazzy wrote:Tell ya what... If Zombies attack and the world ends I'll hook tandem toddlers to a plow if it means I'll be able to eat...

If you have LEO experience, and especially if you're a vet, take a look at possible federal openings you qualify for. A lot of openings out there right now, and the benefits packages are very good.
Nonsolis Radios Sediouis Fulmina Mitto. - USN Gunner's Mate motto

I have 15 years as a LEO. I also have 8 years in just investigations. I know the muni I’m part time at is hiring in July or August, I just have to wait. I’ve been on their roster for 12 years, even when I was full timing elsewhere. I’m just glad I have a fallback position and some supplies to help. I had made it up to regional manager for a state investigative agency, but they restructured and moved me into Discrimination Harassment and Retaliation cases which is a nice way of saying risk mitigation so the state didn’t get too beat up in court. I went from criminal and internal affairs to hurt feelings. For every legit DHR case I had 75 just whining because their supervisor wasn’t “nice” to them or something like that.
Top

Just shows that prepping isn't only for zombie outbreaks and nuclear wars, I think. You put back when you had resources for the time when you didn't, and it's benefiting you now.
Top

Well after 2 months or so I learned a few things. I live in a house with a wife and two daughters, and they absolutely burn through toilet paper like it’s free. I need to put back more as the girls are on summer break so home more. Five and six year old hormel compleats are totally edible although unexciting. Cans of chunked chicken are really useful, and you can use rice in a lot of different ways. I used a food processor to turn it into a powder form a few times and made a thin crispy pizza crust the girls liked.

Everything else is pretty standard. Have an emergency cash fund, diversify your stock, keep an accurate inventory, etc.

I was lucky, as an officer where I reserved hurt his arm working in his garage and I’ve been working four days a week since May 26, although at approximately $9 an hour less than my old job. As of tomorrow I will be full time and with their new pay rate I’ll be $5 an hour less than my old job, but I also interviewed and got part time at Walmart changing tires and oil, plus in 90 days I’ll get that swanky 10% off card to help replenish my non food stock. Things could have been much worse.

Another lesson is if you have some kind of certification from an old job, keep it current. My investigator job did not require a peace officer license, but I kept my training current and stayed commissioned. It gave me a good fall back which opened more job opportunities when I needed them.
Top

Ghostdog914 wrote: ↑
Thu Jun 27, 2019 12:36 pm
Well after 2 months or so I learned a few things. I live in a house with a wife and two daughters, and they absolutely burn through toilet paper like it’s free.

So I've been using the ratio of 1:35. She buys a giant pack of 36 toilet paper rolls at costco. I get one roll she gets the rest. I run out about the same time as she runs out. [I'm not allowed in the master bath but she uses my bath, so It could actually be as high as 1:50 or so, since she also uses my roll sometimes.]

She's gonna be hit hard with reality in the PAW, I've prepped the Roman tersorium [bucket and sponge on a stick] for TEOTWAWKI. 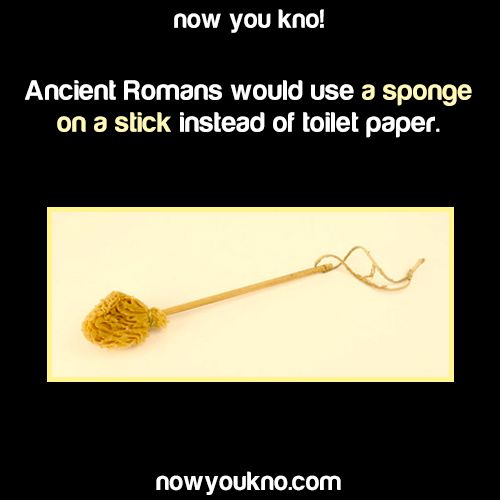 In my house we buy those big 30 roll packs from Costco. Inside are 5 separate 6 roll packs. She buys one of those big packs every two weeks. Every two months I take one of the 6 roll packs. What's that 6:114? 3:57? Round it off and call it 1:20?
Nonsolis Radios Sediouis Fulmina Mitto. - USN Gunner's Mate motto

Pfft. That image makes me think of this situation:

"Honey, it's the PAW. We all have to make sacrifices. It's not pretty, but it'll get us by. We need to use a sponge on a stick now; please understand. We're a team and we need your support in this."

"No. You're not getting my loofah."

As I understand it, a sponge on a stick was used in combination during those Roman times with buckets of vinegar. They were used in communial toilets. When you were done "wiping", you put the sponge back into the bucket.

(Incidentally, I understand that that practice in that time period brings a new and entirely disgusting meaning to the gospel story of Jesus being allowed to drink "vinegar from a sponge" while hanging on the cross... to anyone who did not know toileting practices in the time period prior to hearing that, anyways.) now you kno

Here's a suggestion that will take the remainder of my post to talk about: Maybe try out the idea of family cloths with the girls by showing them some websites about the idea. Without pushing or pressure. Just the knowledge this is a possiblity would benefit them. Maybe some with pretty pictures of where you can buy them, to show it's not a horror show and that lots of ladies love them versus the traditional processed and disposable toilet tissue.

I mean, obviously it's always better to try out alternatives- when you currently have only one accepted way of meeting a need- BEFORE a disaster and/or interruption to the chain of supply. Otherwise, no matter what it is, it'll be interpreted as horrifying/scary/less than (the normal). Instead of an awesome thing to discover in good times that, in this particular case at least, saves a million trees, your budget, and probably an alright percentage of the rapidity by which you have to pump your septic. Among other things. Like that it works better. And that it's more comfortable than either corn cobbs or newspaper. It doesn't rip, which makes it more sanitary than paper. And you don't have to have a trash bag full grossness like with most other alternatives; you can just wash it.

I mean, if cloth diapering is better for babies (and our environment) in so many ways than disposables..... why not..? Toilet paper IS, honestly, a disposable luxury, even if it's socially pushed as the only thing you can do with your butt. In Lyddie (book), the MC had never used or even touched TP in her life before working for the rich lady. And that novel took place only a hundred years ago.

A couple of links DDG threw back on a half second search:

(You could also invest in a bidet. For me, intentionally adding liquid to my butt is gross, so family cloths are my preference.)

An empty folgers can (with aroma seal! lolol) works fine for used cloths. If you could get your ladies to consider that even just for number one, not even number 2, it'd probably save you ... let's see...

If it's Charmin? NT2C gave a quantity use estimate I can go by (in relationship to Costco brand, but still), therefore... if you were to average a cost of 50 cents per tissue roll in a big multipack... times 6 times 5 times twice a month? $15 a month on toilet paper. Per person. Or, per wife.

Or times 3, for two daughters and a wife. $45 a month on toilet tissue, for 90 rolls at 50 cents each. Walmart.com actually has Charmin 24 packs for 23.82, right now, not including tax. That price would almost double the first estimate of cost per roll, to $90 a month for three ladies, at that rate of usage. People pee probably around 6 times a day, versus usually just once a day for taking a dump. $90 divided by 6 is $15; 90 less 15 is 75. An average of $75 savings per month on toilet tissue if 3 female family members used cloths just for pee, at the rate of usage, for the second estimate of the costs per rolls used. $75 per month divided by four weeks- $18.75 saved per week. And you still wipe your butt with tissue.

For the alternate hand: Cost of four loads worth of laundry detergent/bleach? ...Yeah. Worth giving it a try. Especially when you have a choice.

Disclaimer: I'm biased. After having to create family cloths myself out of (shuddering) necessity... after being out of TP a few years back... out in the boonies.... during a 2-week period where I didn't have access to a car or internet or a washing machine... I unexpectedly discovered my butt actually prefers using cloth to paper. It's so much more comfortable, works better, gets way cleaner. And honestly, even handwashing the dirty cloths back then wasn't that big of a deal- comparatively after having done any kind of caretaking. (Still a bit of ick factor, but no more than when tp rips in your hands while wiping and your hand disgustingly touches poop... and even that bit of hand washing cotton ick factor is 100% avoidable with a washer/dryer.)

I like it when things I like better than the alternatives save me hundreds of dollars I can't afford per year. Especially when they require no extra work and take up way less storage space, which I consider at a premium.

"It is better to light a single candle than to curse the darkness."
Top
Post Reply
9 posts • Page 1 of 1