Place to find and meet up with other members of the ZS community in your area of the world and organize. Note: ZS is not responsible if you find the crazy people.

Hello everyone... I have been away for a LONG time. However, I'm making a come back. I did want to make some contacts within my hobby both in the St Louis area and possibly (if we haven't already found you) within the Louisville, KY area. I do medieval combat in period correct armor, albeit there are some sport optimizations for safety. I initially joined under the ACL league, and it has under-gone some internal struggles. Our local team in Louisville, Derby City Armored Combat, went independent and now we are stretching our proverbial wings into competing in multiple organizations events, performing shows at local Ren Faires, and maintaining a weekly gathering for knowledge sharing, practice, and camaraderie.

I'm originally from Missouri, about an hour south of St Louis. I'm going to be returning to the area soon and I would like to develop a team in the area. You can view some of my current team at "Derby City Armored Combat" on Facebook, or search for IMCF on youtube, that's what originally got me interested.
Veteran of Z-Con 2006-2010

This is more of a hobby, lol. However, I could see how it could be applied.
It does require some physical conditions and stamina, neither of which can't hurt to have.
Veteran of Z-Con 2006-2010

My personal harness is a 15th century Italian full plate setup with a sallet helmet. I'll attach a picture when I can find a good one. For normal fighting, we don't normally wear maille, but we have had padded armor on. I am upgrading my kit to be able to compete in the "full harness" category for HMB. That is essentially full historic plate armor with all associated maille.
Veteran of Z-Con 2006-2010

All I can say is, the bruises I've seen that were given through chainmail have been epic.
Mater tua caligas gerit!

...I'm sorry, I wasn't paying attention to what I was thinking.
Top

Great videos of the melees. Had the entire office watching today on a giant screen. Fascinating rulebook as well. If only I had found this 30 years ago...
It's not what you look at that matters, it's what you see.
Henry David Thoreau
Top

I say an Armet would be best for head gear with gambason and mail coif. 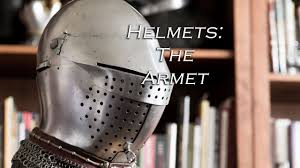 Hey, Blasphemous, thanks for posting about this! I had never heard of this before this thread. Watched some videos and, wow, impressive! My kids are now big fans as well and said, "Sports with swords and armor are better than ones with balls"

I have to agree. Do you know if there are any groups in the Mid-West area?
"When you can't run, you crawl, and when you can't crawl..." "You find someone to carry you."

Ellywick wrote: ↑
Sat Nov 23, 2019 5:51 am
Hey, Blasphemous, thanks for posting about this! I had never heard of this before this thread. Watched some videos and, wow, impressive! My kids are now big fans as well and said, "Sports with swords and armor are better than ones with balls"

I have to agree. Do you know if there are any groups in the Mid-West area?

There aren't any teams in the Mid-West that I'm aware of. The closest one would either be the Memphis, Kansas City, DesMoines, Tulsa, Chicago, and Indianapolis. I'm originally from just south of St Louis and if life brings me back there soon, I want to start a club in that area.
Veteran of Z-Con 2006-2010

Historically, that would not have been a combination that I'm aware of, definitely mail coifs were not worn with that type of helmet. Armets were, to my knowledge, only worn exclusively with plate. Also, armets are terribly expensive.

A gambeson, brigandine armor, and klappvisor would make a solid set of armor for all around purposes.
Veteran of Z-Con 2006-2010