Stuff that’s happening in the world that may pertain to our survival. Please keep political debates off the forum.


Hurricane Joaquin strengthened to a Category 2 storm Wednesday evening, with maximum sustained winds of 105 mph.
The National Hurricane Center said it has adjusted its forecast to note that Joaquin's latest track is a threat to the Mid-Atlantic states and the Carolinas Sunday into Monday.
Wednesday evening's track has the hurricane making landfall between Virginia and North Carolina, and possibly headed up the Chesapeake Bay. The storm is expected to strengthen into a "major hurricane" in the next 48 hours. The National Weather Service said hurricane watches may go up along the Mid-Atlantic as soon as Thursday evening.

Hope everyone is ready, because here it comes...

**Edit to include National Weather Service image and URL**
Last edited by Murph on Thu Oct 01, 2015 7:43 am, edited 3 times in total.
Does your BOB at least have: water, basic tools, fire, food, first-aid kit, and shelter?
"When planning, prepare for the most likely, and then the most catastrophic."
raptor wrote: Being a gun collector does not make you a prepper.
the_alias wrote: Murph has all the diplomacy of a North Korean warhead, but -he has- a valid point
Top

Re: The "Joaquin" Dead

Gonna grab some chicken to fry up tomorrow after I get out of class. Me and Golf Foxtrot are staying in this weekend. Not too worried about the hurricane, more worried that we are getting one-two punched with the Nor'easter as well.
Top

Hmm. I wonder what changes the greater NYC metro area has made to their flood control plans since Sandy?

Edit: BTW: this was my town just yesterday. We do not need any more rain at the moment. 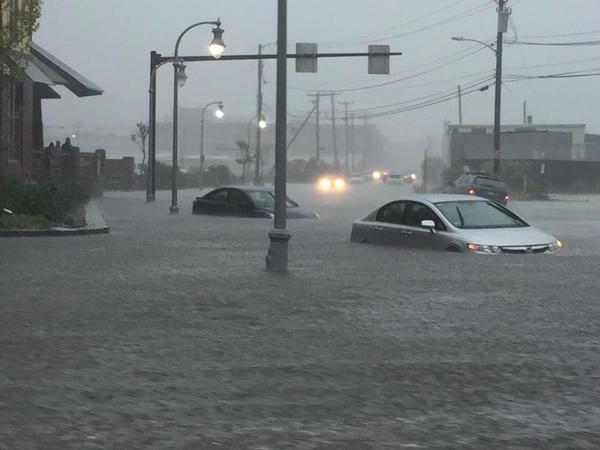 I'm just here to say I approve of the pun in the thread title.
Mostly not here anymore.
Top

I don't think it will be much to worry about in the long run. I bet before it makes land fall it grows a beard, declares itself a rapper and fades into obscurity
" So, brave knights,
if you do doubt your courage or your strength, come no further,
for death awaits you all with nasty, big, pointy teeth."
Top

The 48 hour aviation forecast I think is good prediction tool for this storm.

Hopefully that front will keep pushing it out to sea.
Does your BOB at least have: water, basic tools, fire, food, first-aid kit, and shelter?
"When planning, prepare for the most likely, and then the most catastrophic."
raptor wrote: Being a gun collector does not make you a prepper.
the_alias wrote: Murph has all the diplomacy of a North Korean warhead, but -he has- a valid point
Top

Unfortunately that front has a lot of rain behind it. So either way the east coast folks need to get their foul weather gear and wading boots out of the closet.

It looks like the front will push the hurricane away from the coast but will be slowed a lot in the process. So it means a lot of rain due the slow passage.
Duco Ergo Sum

Not a bad time to visit the Rapidan or Rappahannock.
It's not what you look at that matters, it's what you see.
Henry David Thoreau
Top

Forecast still predicts a crap-ton of rain, three months worth in three days, so plan accordingly and stay safe, everyone.
Top

Charleston,SC is apparently suffering from rain induced street flooding due to the compbination of the slow frontal passage and Joanquin.

That and a 700 ft container ship is presumed to have foundered in the storm. Which begs the question of why a vessel like that was taking a risk of being in that area.


If this 48 hr map is correct the east coats is going to very wet for quite a while. If you are in the area, plan accordingly.

I don't think I have ever seen this much rain and I'm all the way here in Patrick County. It's not quite as bad as SC yet, but several bridges have been washed away. They were fairly old but still not something expected.

"Firehose" of moisture shown on the water vapor satellite image:

Looks like we can expect several more days of rain and wind. According to my rain gauge we've got 18 inches since Monday

A good update with lots of pictures - heaviest rains in 200 years.

Rainfall in SC really illustrates the need to prep basic food, water and supplies. Stay safe everyone affected by this.


"Regardless of where you are in the state, stay home," said the governor. "Stay off the roadways."

Boondock said: Rainfall in SC really illustrates the need to prep basic food, water and supplies. Stay safe everyone affected by this.

Testify, Brother Boondock. Ideally, stock up well before everyone else has the same idea.

RALEIGH, N.C. — President Barack Obama has declared a state of emergency in South Carolina as Hurricane Joaquin combines with other storm systems to dump rain and cause flooding in the state, with more wet weather likely for days.

In picturesque downtown Charleston, S.C., where most streets were flooded, businesses had sandbags at their doors to help brace for rising tidewaters. “Flooding is extreme,” said state Rep. Peter McCoy of Charleston, in a tweet urging constituents to stay indoors. The “threat for widespread, catastrophic flooding” and gusty winds would continue across parts of the southeast through the weekend, the National Weather Service said.

Some 94 state roads and bridges were closed because of flooding, while some people spent the night in American Red Cross shelters and more than 29,000 customers were without power statewide, the South Carolina Emergency Management Division said on Sunday.
Top

From Charleston my take-Aways so far. Some towns hit harder than others. Some good photos if your on FB on "Summerville Social" . Places where I've fished and Kayak'd normally under 3ft stagnant water, now a raging river, est 25'ft and rapids. ( Wadboo Creek). In awe of some of what I've seen.
Slab foundations suck when the water table rises and the ground gets inundated. I had to do a few emergency patch jobs at 3am, but otherwise we're far enough above the flood zone we're ok. Went to the store early Friday (Was normal shopping day) still plenty of stuff on the shelves, but you could tell it was getting crowded and the panic buying was beginning.
So far:
What went right: Full tank of gas on Wednesday. Didnt _have_ to go shopping, but frankly didnt have anything else to do. Plenty of water, purification methods, and food. Power was on steady, but had backups ready to go. Watched the idiots on FBook and the news play with fate and cross things they shouldn't.
What went wrong: Maybe should have checked under the carpet for holes in the slab :/ ? Shopping trips at 3am suck even if Walmart is empty.

Traveling could be tough with 200+ road closures and bridges out. 70 Miles of I95 shut down.

I tilt at Windmills

BattleVersion wrote:For my Family?...Burn down the world, sure... But, I'm also willing to carry it on my shoulders.

raptor wrote:...I am allergic to bullets;I break out in blood.

jnathan wrote:... you can choke on my Hebrew National.

Also our local county has declared a curfew to keep people from accidentally plowing into flooded areas. So as I'm leaving my development, there is a deputy sheriff car there. I think "Great, now what?"

Here's how the exchange went:

And off I drove.

jnathan wrote:Since we lost some posts due to some database work I'll just put this here for posterity.

As the water level recedes more bridges being classified as deficient and unusable. Priority will likely go to the heavier traveled bridges/interstates & primary routes. Could leave some bridges in more rural areas out for a few months. Always know your route and backup routes. Tons of potholes and washouts all over. Military (NG) is supposed to be boots on the ground but I haven't seen them, they may be upstate in Columbia where a couple small dams gave way.
My area picked up 20"+ of rainfall in just over a day. 20 miles away picked up a total of 27"+

From TWC:
"16.61 inches of rain between midnight and 10 p.m. Oct. 4 along Gills Creek in Columbia, according to the National Weather Service. The ensuing flash flood was so violent that it destroyed the official flood gauge there, but not before surpassing and nearly doubling the previous all-time record crest."

If you know the area, yesterday it was impossible to get from Charleston to Myrtle beach without routing through North Carolina. Unless you wanted to roll the dice and try dirt roads through the forest.

Feel free to ask any questions you may have.
I tilt at Windmills

BattleVersion wrote:For my Family?...Burn down the world, sure... But, I'm also willing to carry it on my shoulders.

raptor wrote:...I am allergic to bullets;I break out in blood.

jnathan wrote:... you can choke on my Hebrew National.

Return to “Disasters in Current Events”