The_alias was nice enough to plan a thanksgiving weekend trip for us and our respective lady friends late last year, thought I'd post up some pictures and thoughts. 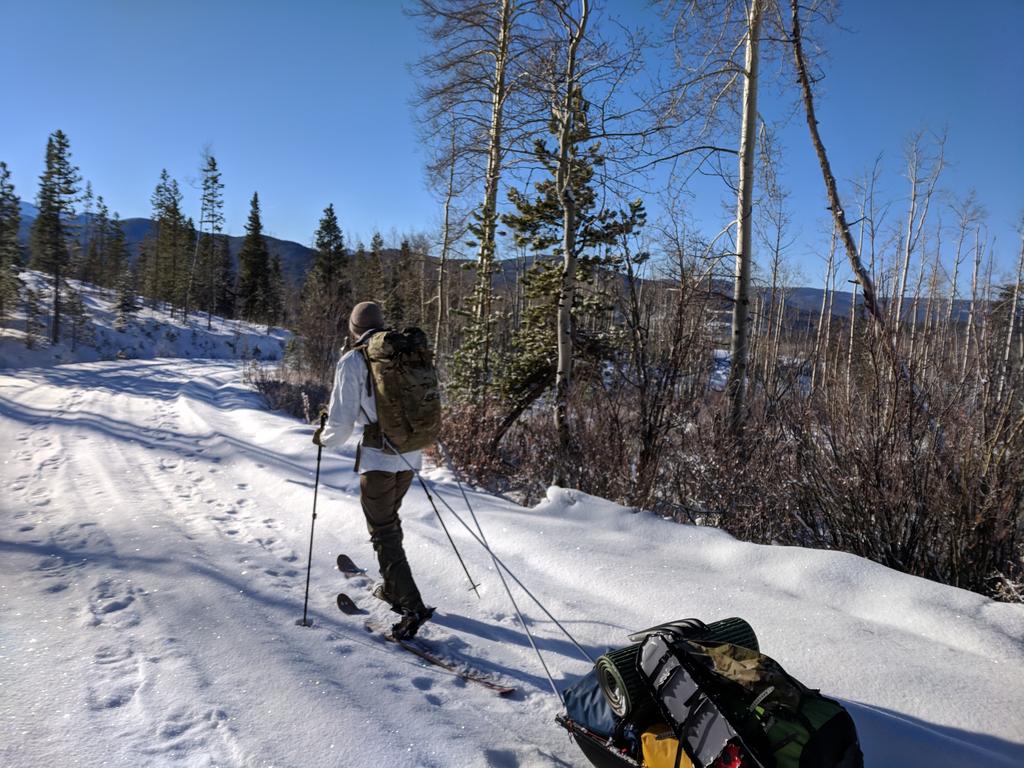 pulk sledding in remains my go-to for winter trips, I was able to leave my wife with nothing but a daypack and my smallish overnight bag was quite light as well. I used three 65L sea to summit dry bags (can't recommend these enough) to organize the sled, a "his" "hers" and "ours" made finding stuff easy. top entry duffle bags would have been more convenient in the yurt, but much heavier and bulkier on the sled. 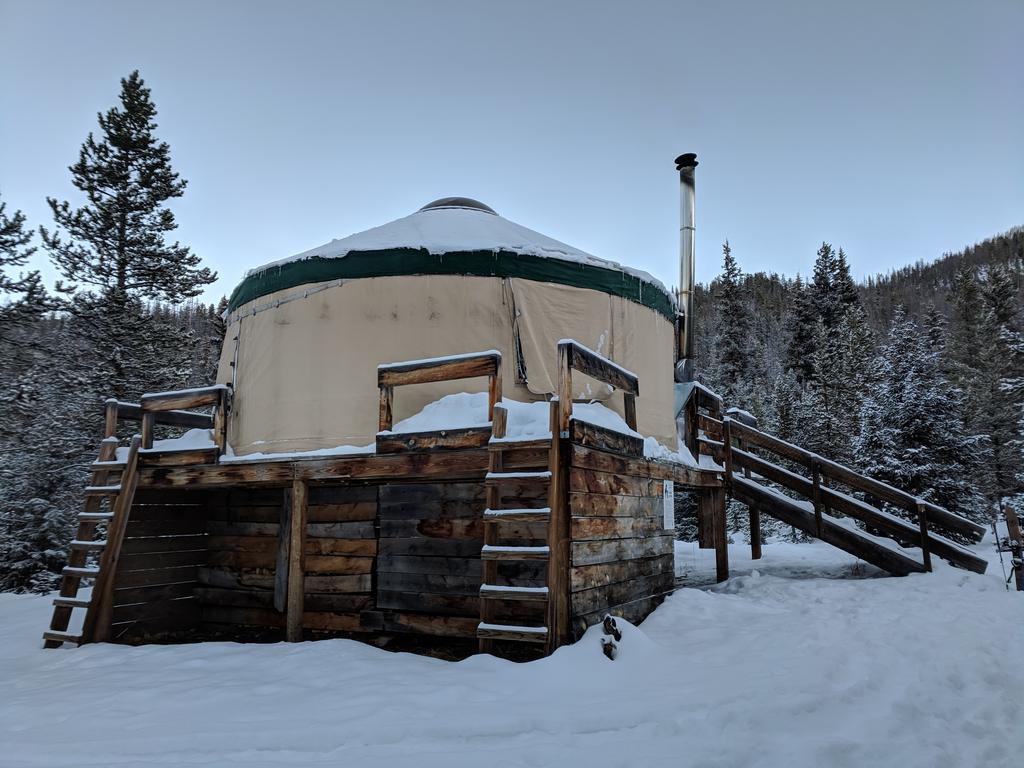 I believe our accommodations was a 20' model made in Colorado. It was on a nice elevated platform with propane and firewood underneath. There was a two-burner propane stove for cooking, and a large wood stove for heat. 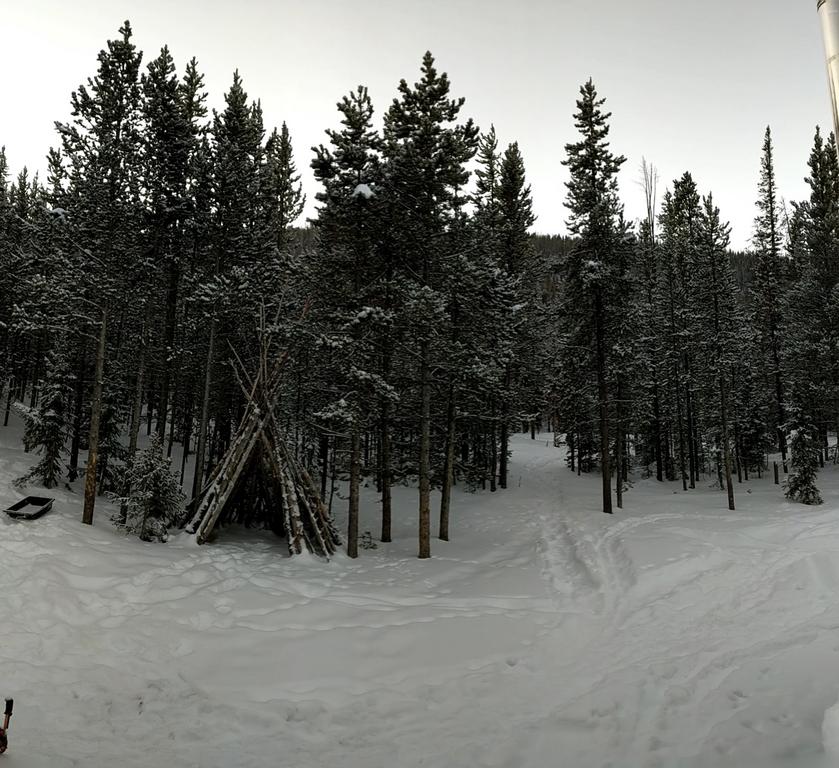 Someone had also started building a shelter out the back sometime in the past. 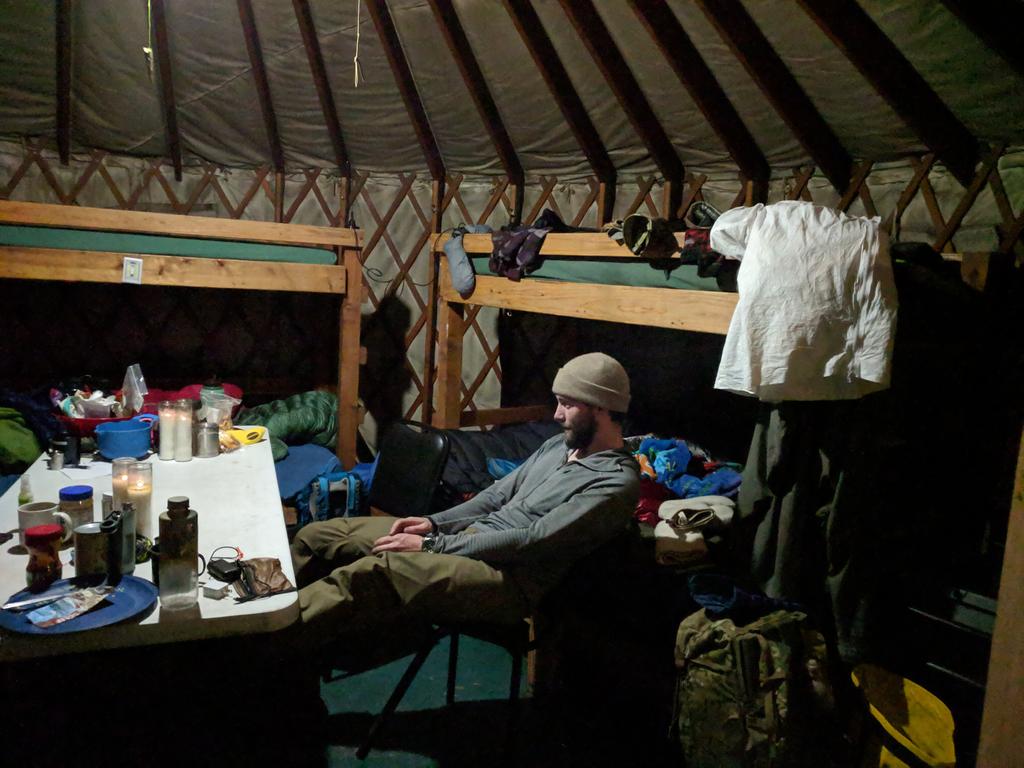 The interior was spartan, but comfortable. A lifetime table and a few metal chairs, a small cabinet for dishes and 3 bunks. It was practically uninsulated to no surprise, and temps responded quickly to the life and death of the fire.

I carted in a few liters of water in an MSR dromedary for drinking water, so we could save the inevitably funky snowmelt water for washing and cooking.

Area lighting was mostly a BD Apollo lantern, for which I must again thank the BD designers for moving to a design that doesn't cast a giant shadow directly under where it is hung. 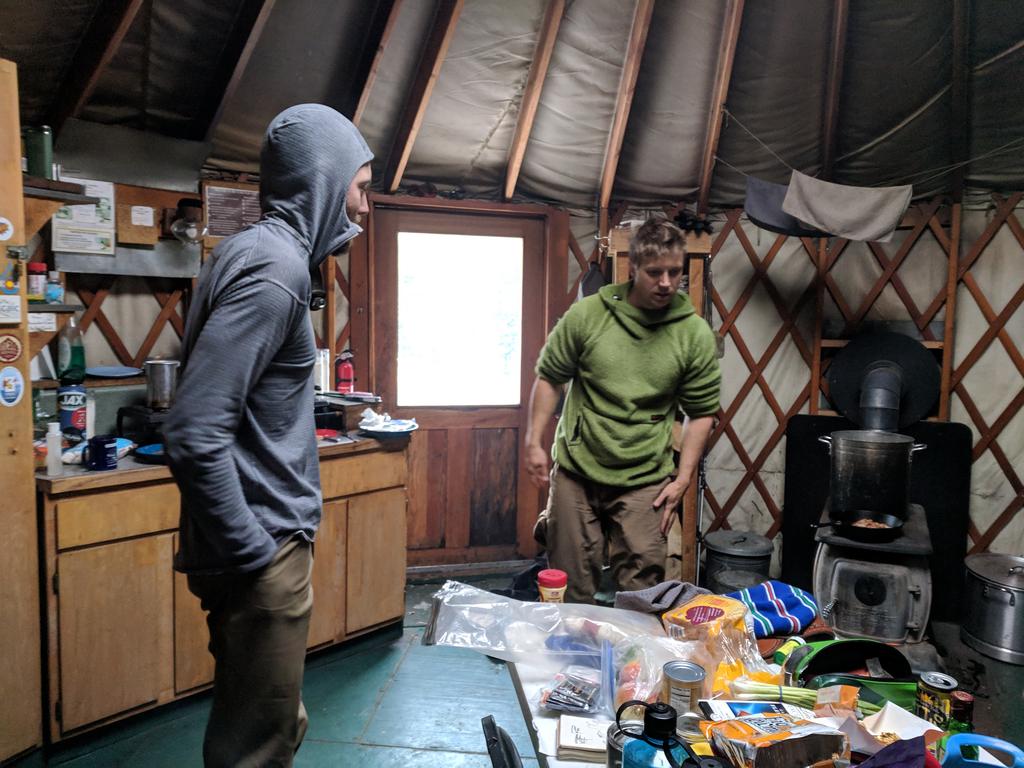 the biggest challenge was the wood stove. for reasons unknown to me (breakage? liability?) the damper had been removed so of course the two temp settings in the yurt were "hot as balls" and "below freezing." The second night in particular we awoke to a lot of frozen water inside the yurt, including a thick layer from condensation on the inside of the door: 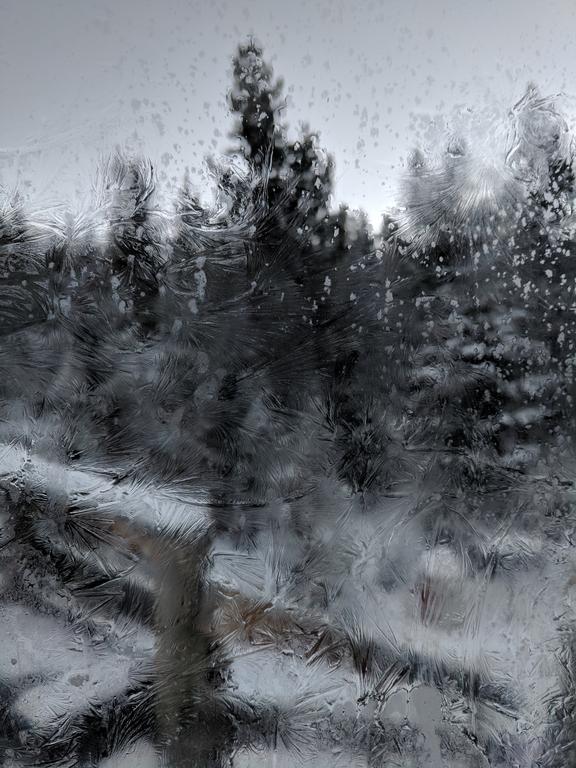 We tramped around the area a bit, played on skis and snowshoes, and generally lounged. My wife has historically had a lot of trouble with winter, but we made some big strides in getting her a comfortable clothing system this year: 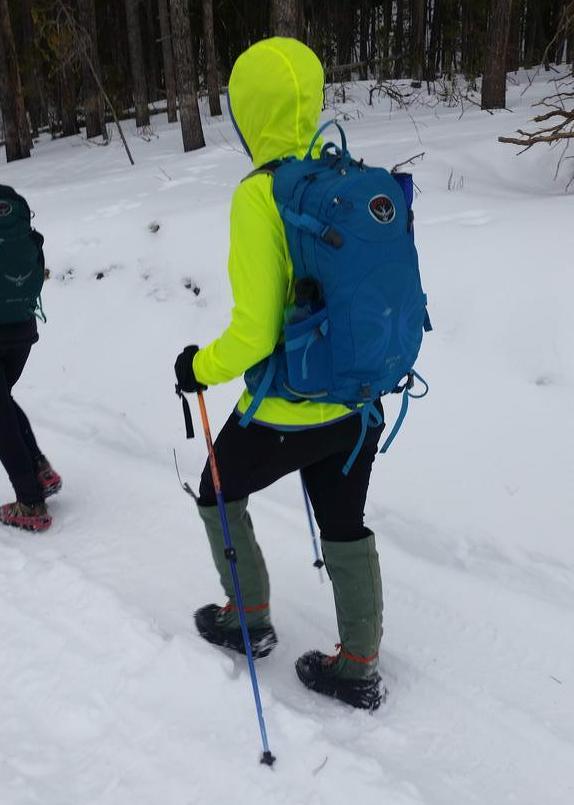 She has taken to the surplus AF mukluks with a readiness unsurpassed by any surplus gear I have tried to foist upon her, I sized her up a bit and installed double liners and she had warm feat for the entire trip (a certain first for her). The above windshirt did have some freezing issues, and there was some ice built up both inside and out, I have since upgraded her to a hopefully more breathable version.

Swapping her baselayers from merino to Patagonia Capilene 4/thermal weight (a super tiny gridfleece) has also made a huge difference in not trapping sweat, a problem that left her chilled on nearly every winter trip in the past. She now has mostly sworn off merino alltogether. 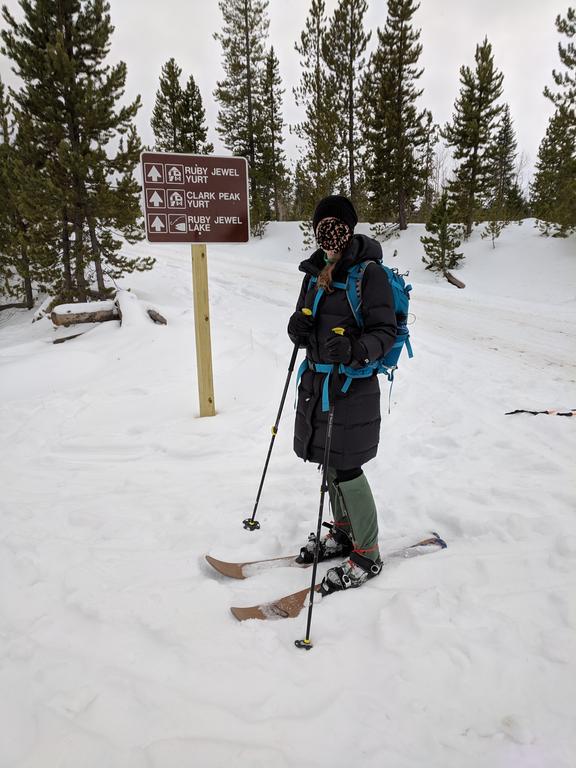 Despite my warnings and all common sense she managed to not overheat in a long down parka that she rarely took off, and since she has not taken to insulated pants she turns her nose up at many shorter performance pieces that might work better. I now am on the lookout for some more long coats to keep in car kits and as backup for her, and am trying to convince her to let me extend her mukluks above the knee to cover the small gap she occasionally complains about. 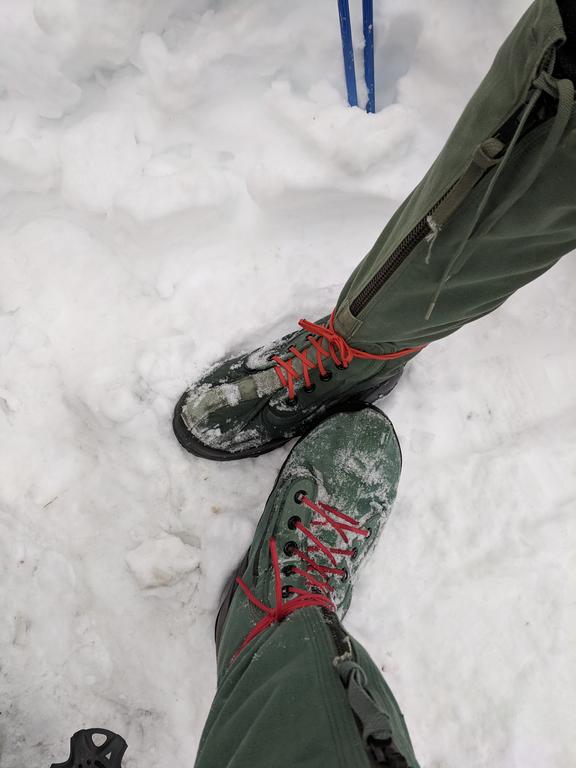 I brought a few pairs of winter footwear to try, and didn't have as much luck as my wife with the AF mukluks, unsurprisingly they gave me mild blisters after only a mile or two, and as you can see the water repellency was inconsistent. I will likely need to wax or otherwise proof her muks before next winter. 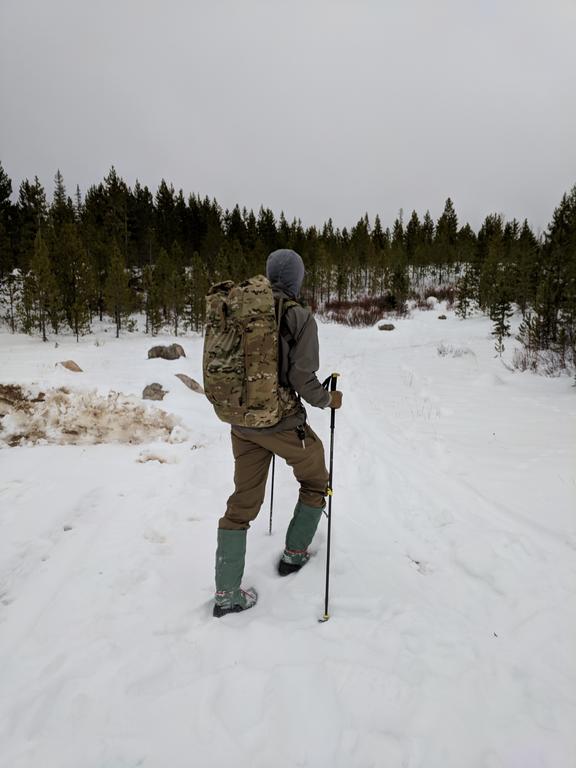 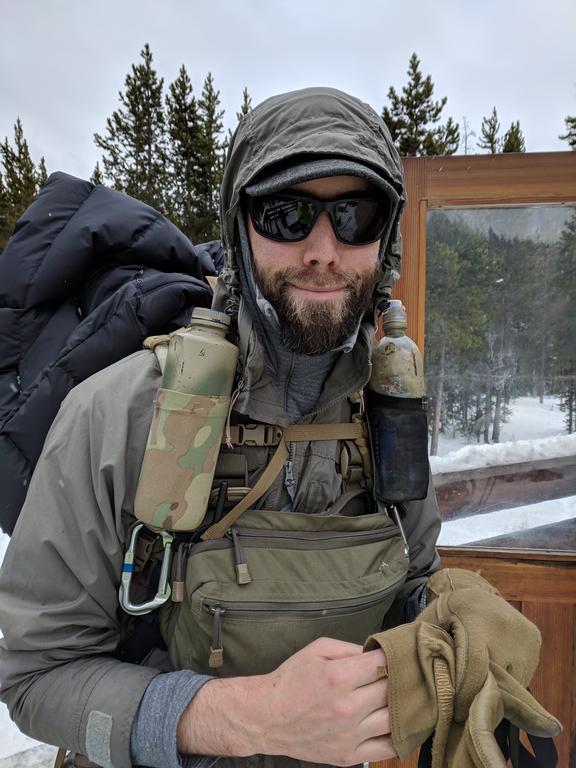 Lately I have been experimenting with strap mounted bottles, and despite some mild freezing it worked well. They conflict a tiny bit with the HPG kit bag, but not bad enough to stop doing it.
my winter uniform remains largely unchanged; a grid fleece hoody (either ECWCS level 2 or Capilene 4) and a windshirt for all active times, and some modified ECWCS green puffy liners for static use. The windshirt in this pic isn't terribly breathable (beyond PCU level 4) and would sometimes frost up on the inside. I have since replaced it with a Rab Borealis which I like better in many ways.
I typically get away without baselayer pants, but occasionally regret it. I have been using some homemade stretch-woven pants (think tweave, or an unlined softshell) that sheds snow and wind well enough. 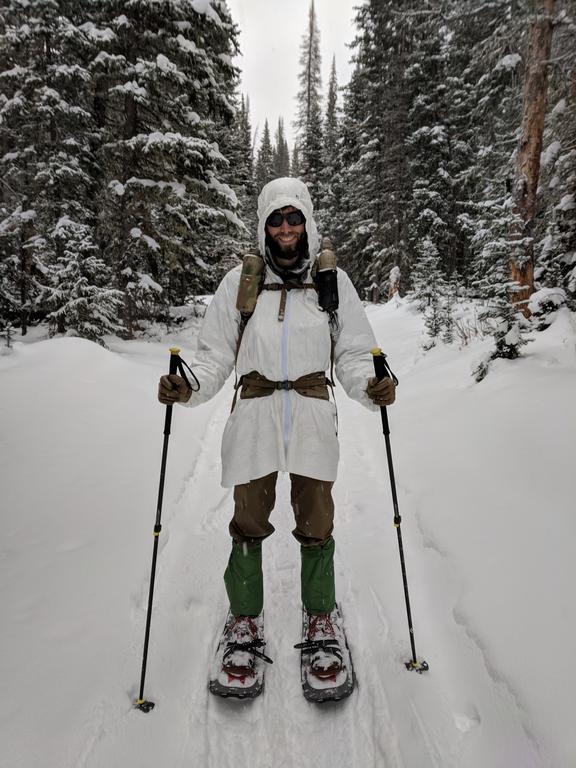 I also brought my DIY overwhites along to play with, I am always surprised how long this one has lasted and how well it performs in general as a wind shirt. It started life as some XXL tyvek coveralls, but I cut the legs off at the crotch and added a separating zipper. Tyvek tape and some of the leg fabric expanded the hood to fit over winter head gear. 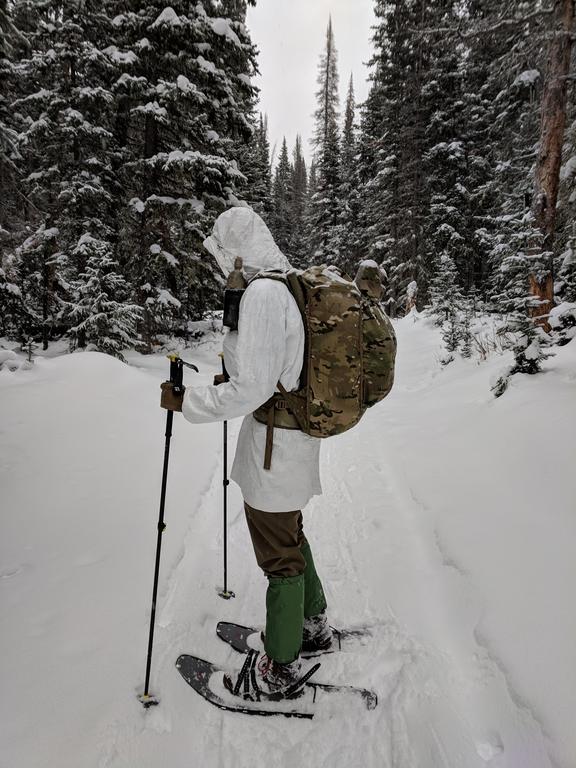 I'm quite in love with the longer length and need to duplicate it in a more durable woven fabric. You can also see my home-made waterproof socks I am starting to prefer to gaiters. 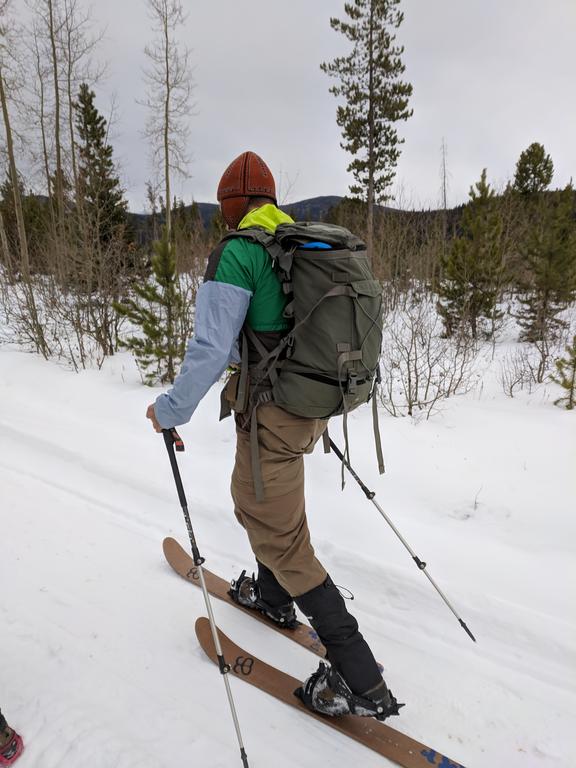 the_alias and I were both on Altai skis; as the more experienced skier he could speak more to their compromises but for me they are still just very very fast snowshoes. 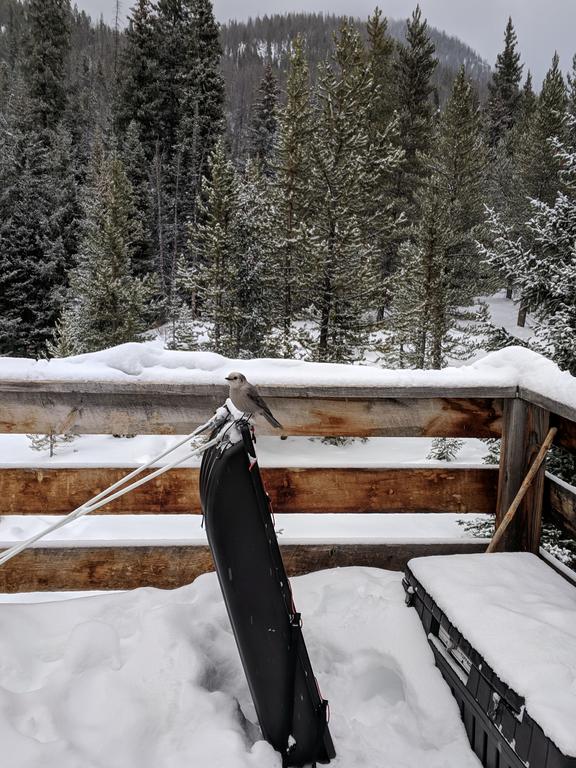 we were set upon by whiskey jacks much to everyone's enjoyment, and also saw several moose from our back porch. Otherwise we saw very little wildlife. 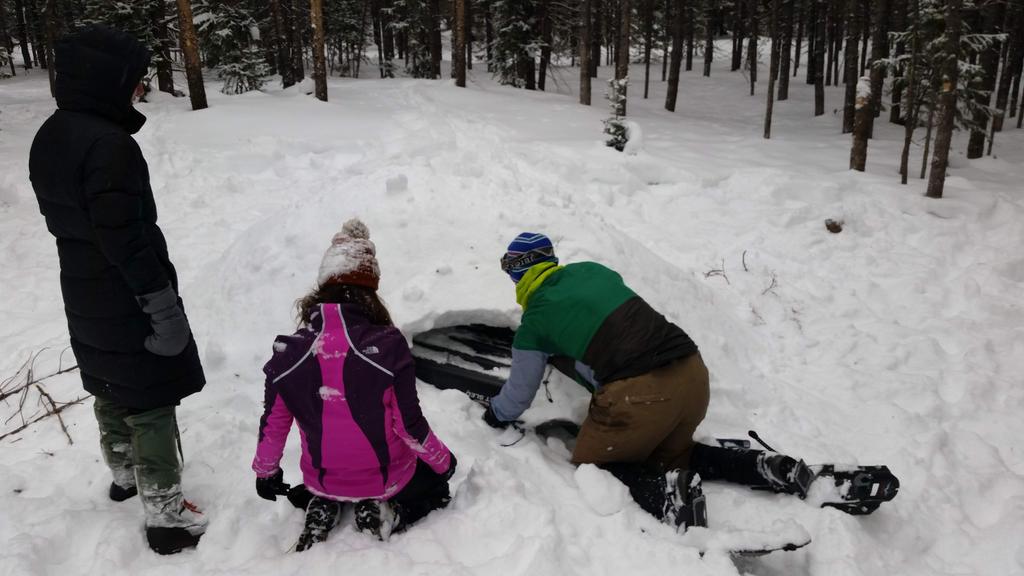 The_alias also treated us to a Quinzee demo using our sleds and packs as the form. The snow wasn't ideal for it but it was a good effort, and I played around with various snowshoes as improvised snow shovels. 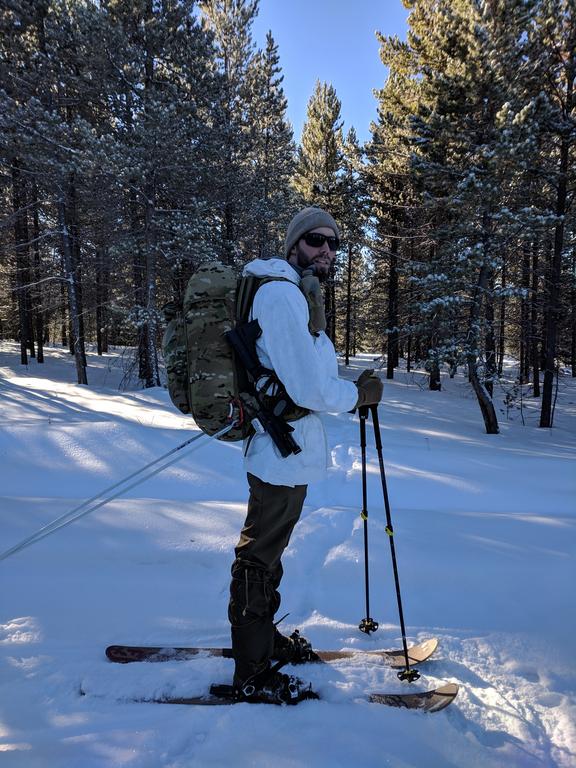 I have been experimenting with an Endo adaptor and a shockwave brace as an all-purpose backcountry PDW/survival gun, with a quality red dot it might be about the best thing going right now. Its about 3lbs empty and quite small. We had the trails to ourselves but it would have been fairly easy to tuck under my jacket and still be far more accessible then a broken down survival rifle and possibly even more so then a handgun in my front pack.
Carrying it slung while towing a pulk was annoying, but far from difficult, and a bit more experimentation would likely reveal a better method. 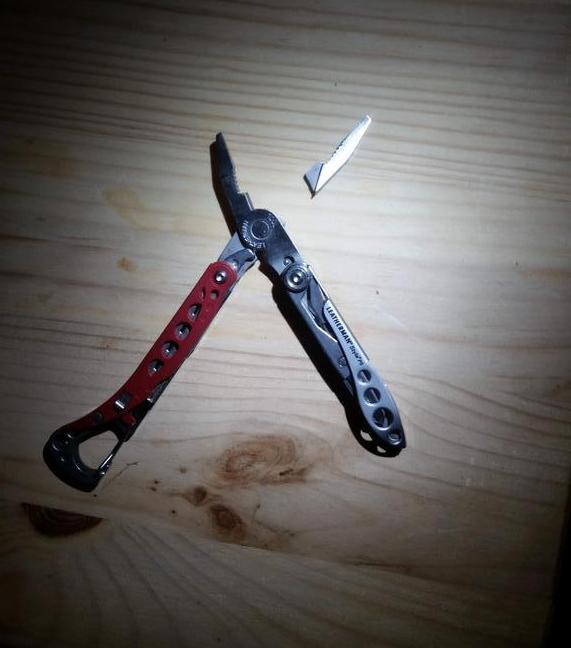 the only major gear failure was my newish leatherman. I'd been excited to find something larger then a keychain multitool but smaller and TSA compliant unlike most full-sized tools. Buuut..in trying to retrieve a stuck arrow from a tree the pliers simply broke. 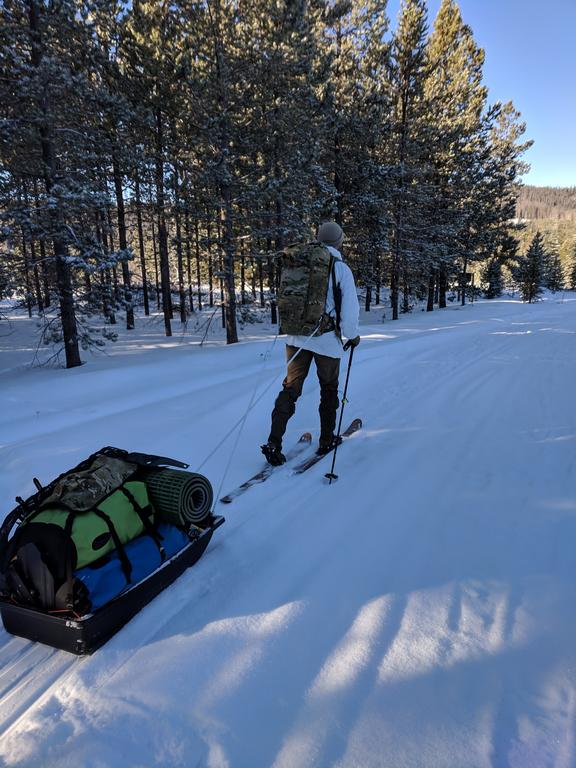 -pulks are awesome, especially when you need to bring your own beer and bacon
-dampers are extremely important on stoves. If going back I'd consider trying to bring one to insert.
-melting snow is a chore, and having liquid water is a nice luxury.
-I think there is room in my quiver for a better non-mukluk winter boot for crushing miles or for when it is slightly to warm for muks. I think the Baffin Borealis is that boot, but I haven't picked up a pair yet.
-I am constantly surprised how little clothing you need when you have the right layers and are moving.
-cast iron is awesome. After using the yurt's well seasoned skillets me and the wife decided to go get our own and are loving it.
-Knowing more card games then go-fish and solitaire are important when there is no electricity. But Euchre is dumb, sorry, just gonna say it.
share your tobacco and your kindling, but never your sauna or your woman.

Looks like you all had a lot of fun!
You go 'round and around it
You go over and under
I go through
Top

Awesome write up and pictures. Those shots of the ice on the yurt window and the whiskey jack on the pulk are beautiful! Are you going to return your nuked Style back to Leatherman for a warranty replacement? That's part of what you're paying for with a Leatherman.
The Restless Dead http://zombiehunters.org/forum/viewtopi ... 13&t=80397

majorhavoc wrote: ↑
Fri Mar 08, 2019 8:32 pm
Awesome write up and pictures. Those shots of the ice on the yurt window and the whiskey jack on the pulk are beautiful! Are you going to return your nuked Style back to Leatherman for a warranty replacement? That's part of what you're paying for with a Leatherman.

I think my wife gets credit for the window at least, I am planning to send it back but the 5+ year old broken streamlight in a drawer says I might not get to it quickly
share your tobacco and your kindling, but never your sauna or your woman.

This was a fun trip and a revealing one.

I came in much later than Ronin - pulking in the dark wasn't so bad as the track was well laid. The uphill approach in places was quite brutal though 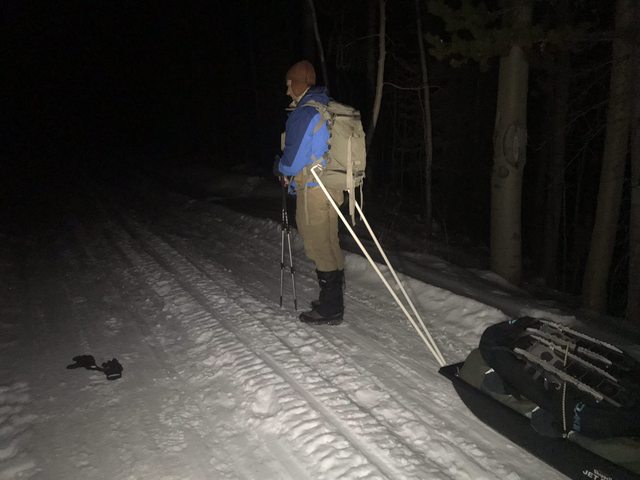 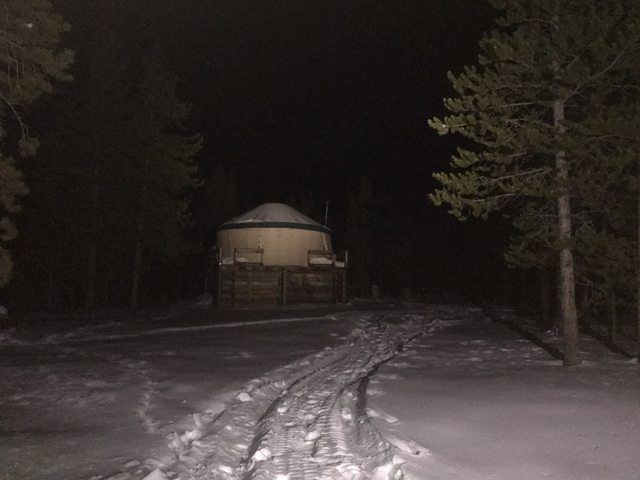 Going out I took the skis for a run 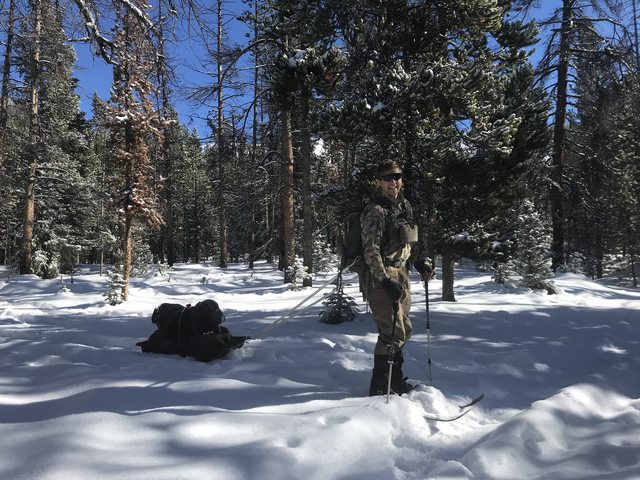 As did my lady friend who was very competent and flew over the flat ground - considering I have 70lbs on her that's pretty good endorsement of the ability of pulk sleds to move loads.

The skis are basically fast snow shoes - you can get a great space on them but I'm unsold on this length and with regular hiking boots being able to do much that doesn't risk injury. 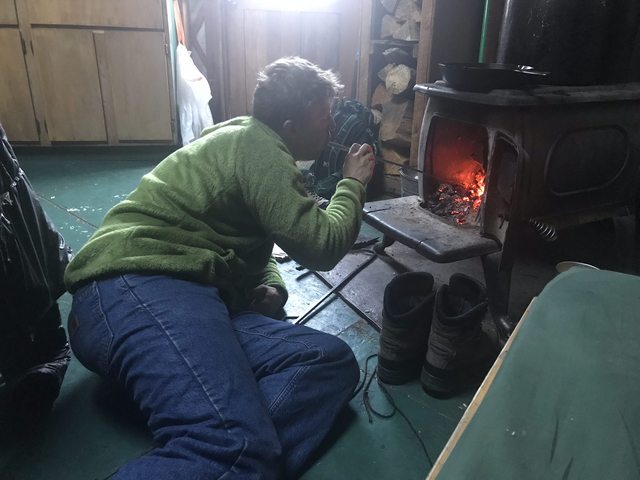 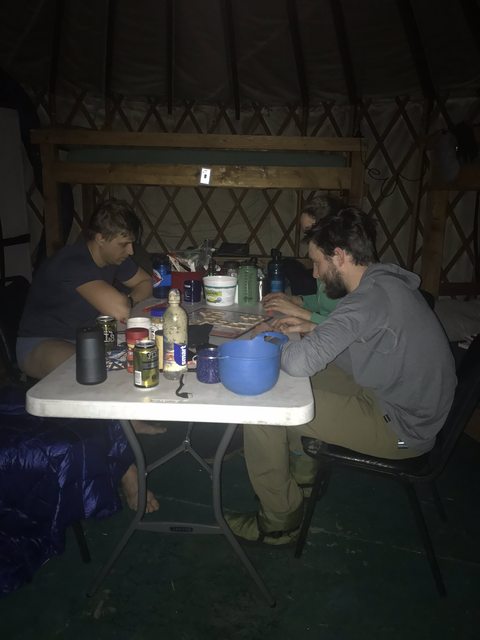 Ronin playing with a whiskey jack 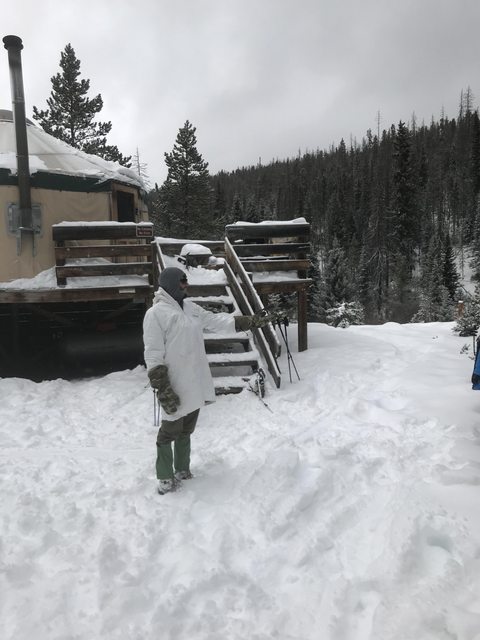